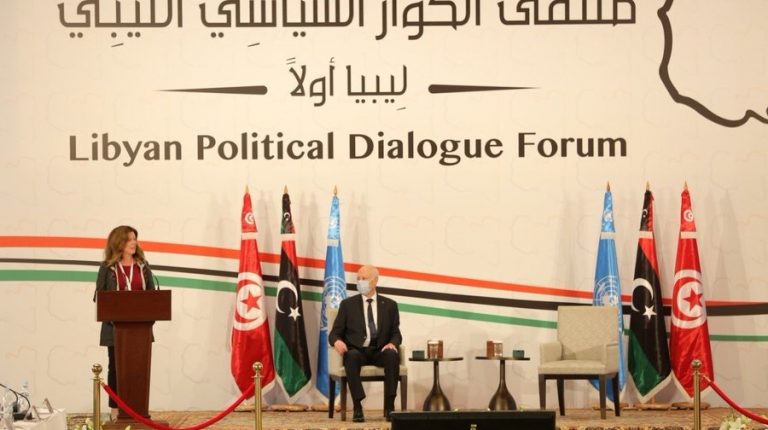 The United Nations Support Mission in Libya (UNSMIL) opened, on Monday, the Libyan Political Dialogue Forum (LPDF) in Tunisia, aiming to set a roadmap for elections in the country.

“I am speaking to you at a time of rare optimism. After 18 months of war, and many years of crisis, I believe there is finally a glimmer of hope,” Acting UN Libya envoy Stephanie Williams said, during a speech in the opening ceremony in Tunis. She said, however, that “the road will not be paved with roses and it will not be easy”.

“The new government will launch national reconciliation, combat corruption, and restore public services,” Williams said, “Its progress will be monitored, its work will be reviewed on a regular basis by mechanisms that can hold it to account.”

She noted that “the overriding aim of the National Political Program is to renew political legitimacy by holding national elections, within an agreed timeframe”.

In the meantime, Williams said that she had just come from the city of Ghadames, “where we held a successful round of military talks.”

The opening ceremony was also attended by Tunisian President Kais Saied, who described the event as historic.

“I urge you to focus on a unified Libya, as there is no room for dividing Libya. Some talk about East and West, but the Libyan people are one. The solution for the Libyan people is to regain their full sovereignty,” the Tunisian president said in his speech at the opening ceremony.

Saied emphasised the significance of reaching a peaceful solution for the crisis in Libya, pledging to “put all capabilities to come up with an interim constitution for Libya”.

He also said that “there are powers that have worked on dividing Libya, and they are still working on it”.

A total of 75 participants are taking part in the LPDF, all of whom were chosen by UNSMIL to represent various Libyan parties.

The country’s peace talks in Tunis aim to end the transitional period through free, fair, inclusive and credible parliamentary and presidential elections. They aim to establish a functioning presidency council and form a single, unified, inclusive and effective Libyan government, according to the UN.

The UN has intensified its efforts over the past weeks to reach a peaceful solution to end the crisis in Libya.

Egypt hosted two rounds of talks  in Hurghada and Cairo in September and October, respectively, under the auspices of the UN. The talks were held to discuss military and security issues, as well as early elections and the constitutional process. A round of political negotiations over Libya was also held in Morocco.

Late in October, a permanent and complete ceasefire agreement was signed by the rival Libyan parties following UN-facilitated talks in Geneva. The Libyan parties “agreed that all military units and armed groups on the frontlines shall return to their camps”.

The agreement also provides that “this shall be accompanied by the departure of all mercenaries and foreign fighters from all Libyan territories land, air and sea within a maximum period of three months from today”.

Since the fall of Muammar Qaddafi in 2011, Libya has undergone years of conflict. The oil-rich country has been split between two parties since 2014, the Government of National Accord in Tripoli, and the Libyan Arab Armed Forces in Benghazi.