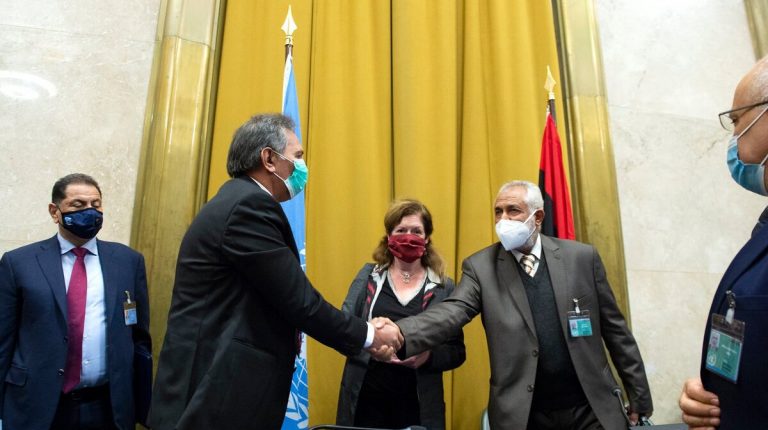 The sixth round of 5+5 joint military commission talks was launched, on Tuesday, in the northern Libyan city of Sirte.

The talks, which will take place from 10-13 November, aim to “advance the implementation of the Ceasefire Agreement signed in Geneva on 23 October, and to build on the progress achieved last week in Ghadames,” the United Nations Support Mission in Libya (UNSMIL) said.

“Participants are expected to complete discussions over a ceasefire implementation as well as the formation of specialised sub-committees,” the UNSMIL.

The latest round of 5+5 joint military commission talks come in parallel with the Libyan Political Dialogue Forum (LPDF), which was launched on Monday in Tunisia. The LPDF aims to set a draft political roadmap for presidential and parliamentary elections in Libya.

The move is the latest of the UN’s efforts to end the long-time crisis in Libya which has led to the dispersion of power, and the deterioration of the country’s economic conditions and living standards of the Libyan people.

The LPDF aims to end the transitional period through free, fair, inclusive, and credible parliamentary and presidential elections. It also aims to establish a functioning presidency council and form a single, unified, inclusive and effective Libyan government, according to the UN.

“The overriding aim of the National Political Program is to renew political legitimacy by holding national elections, within an agreed timeframe. There will be no more delays,” Acting UN Libya envoy Stephanie Williams said, during a speech at the opening ceremony in Tunis on Monday.

The opening ceremony was also attended by Tunisian President Kais Saied, who described the event as historic. A total of 75 participants are taking part in the LPDF, all of whom were chosen by UNSMIL to represent rival Libyan parties.

Late in October, a permanent and complete ceasefire agreement was signed by the rival Libyan parties following UN-facilitated talks in Geneva. The Libyan parties “agreed that all military units and armed groups on the frontlines shall return to their camps.”

This shall be accompanied by the departure of all mercenaries and foreign fighters from all Libyan territories land, air and sea within a maximum period of three months from today, the agreement stated.