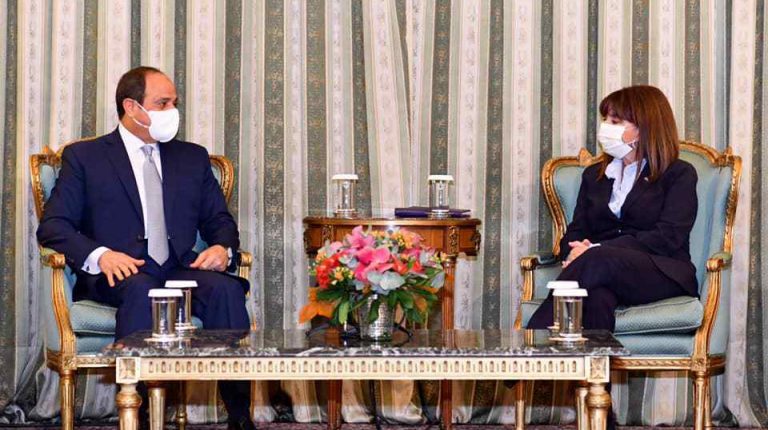 During the visit, the two sides discussed boosting cooperation between the two countries and other regional issues.

Sakellaropoulou honoured President Al-Sisi with the highest and oldest medal in Greece, with Al-Sisi in return awarding her the Nile Medal.

Both leaders held extensive discussions in the presence of delegations representing the two countries. During the meeting, Al-Sisi expressed Egypt’s aspiration to deepen and strengthen its relations with Greece, especially at the economic and commercial levels.

This could be achieved by maximising the volume of Greek investments in Egypt. The President invited his Greek counterpart to visit Egypt following the end of his own visit to Greece.

The meeting dealt with a number of regional issues of mutual concern, such as combating illegal immigration and terrorism, achieving coexistence among religions, and supporting peaceful solutions to the current crises in the region.

The meeting addressed the latest issues in the eastern Mediterranean region, where Cairo extended support for Greece in the dispute with Turkey over maritime borders and gas exploration.

Al-Sisi affirmed Egypt’s support to Greece against any provocative actions or violations on its maritime borders in the Eastern Mediterranean region. Ankara and Athens are both involved in a long-term conflict over maritime borders and gas exploration in a region which both countries lay claim to.

Conflicts have re-erupted lately after both countries took steps in demarcating maritime borders. Both countries accuse the other of violating their borders.

Al-Sisi and Sakellaropoulou exchanged views regarding combating extremism, and Al-Sisi reviewed Egypt’s experience in this regard. They also agreed to intensify the exchange of experiences and information between the two sides, to face the challenges posed by terrorism, which is a “cross-border” phenomenon.

Moreover, president Al-Sisi met with Greek Prime Minister Kyriakos Mitsotakis to discuss methods of developing and upgrading the bilateral relations between the two countries in many fields of mutual interest. Military, political and energy cooperation top the mutual cooperation interest.

The Egyptian President praised the level of tripartite cooperation between Egypt, Greece, and Cyprus, in achieving economic development for the three nations.

Al-Sisi stressed the importance of boosting bilateral and trilateral cooperation in the Eastern Mediterranean region, noting that the East Mediterranean Gas Forum represents one of the main axes in this cooperation.

Al-Sisi and Mitsotakis meeting touched upon the latest developments in Libya, as the Egyptian President reviewed his country’s efforts to stabilise the situation there. He also noted the necessity for international cooperation to support the political settlement in the Libyan crisis.

They also discussed combating terrorism and countering the extremist rhetoric, pointing out of the need for refraining from insulting religious holy symbols.