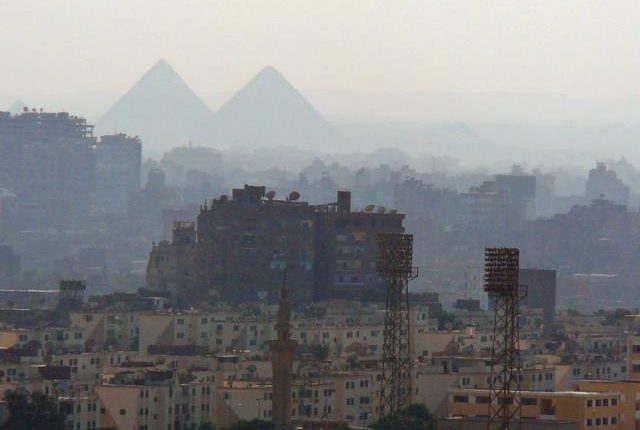 Qatar and Egypt, respectively, are the two Arab states most affected by air pollution, in a region that already suffers from high levels of particulate matter pollution.

The report was issued by the Health Effects Institute (HEI), an independent scientific institution based in the US capital of Washington, DC. The Institute specialises in research on the health effects of air pollution, and has examined mortality data around the world and hundreds of research studies linking air pollution to health problems.

The World Health Organization (WHO) sets the average long-term annual exposure to fine particulate matter less than 2.5 micrograms/cbm of air. This average increases in the case of exposure to micro-pollutants up to 10 micrograms, so that the average annual long-term exposure to these particles is 20 micrograms for every cubic metre.

Long-term observations indicate that air quality is still poor in the Arab region due to the extensive use of fossil fuels, and the lax application of measures to reduce harmful emissions.

Mostafa Mourad, Head of the Environmental Quality Sector at Egypt’s Ministry of Environment, attributes the presence of these high concentrations of particulate matter and pollutants in the air to human activities and natural factors. He said that Egypt is located within the world’s largest desert region, which is one of the causes of the high percentage of air pollutants in all countries of the region.

“All countries in the region have high levels of particulate matter concentrations,” Mourad said, “In our case in Egypt, the desert is responsible for a percentage that may reach in some locations and times to more than 50% of the detected particles.”

He added that the timing of occurrence of dust storms could be predicted through mathematical models, but the natural impact remains constant throughout the year.

Regarding the separation, whether in monitoring or control, between natural pollutants and pollutants resulting from human activities, Mourad said that this is done through a specialised monitoring system known as the placement of pollutants to their sources in the case of particles. Egypt is currently working on indigenising this method through the transfer of French expertise as part of cooperation with the World Bank.

Despite its location among the ten countries most exposed to micro-pollutants, the report indicates that Egypt recorded a decline in the amount of particles during the last ten years, estimated at 10.6 micrograms/cbm of air.

The report deals with the health effects of air pollution, with the most important effects being that nearly 500,000 newborn children lost their lives during their first months due to complications from air pollution in 2019.

Egypt also ranked among the foremost countries according to the number of child deaths related to air pollution, coming second in Africa (after Nigeria, which recorded 198,000 deaths). Egypt was also the first in the Arab world, with 91,700 deaths in 2019, followed by Morocco (29,200 deaths) and Iraq (25,600 deaths).

Regarding the reports figures, Mourad said, “It must be taken into account that the deaths mentioned in the report or otherwise are not based on direct data from health authorities in different countries, but based on specialised mathematical models for this matter.”

As a result, he believes that, in the event of an increase in population in countries such as Egypt, and even with a decrease in the concentration of pollutants, the case numbers will remain high. This is given the high number of people exposed to concentrations that remain higher than the standard set by the WHO.

The global lockdown measures, which have also been applied across the Arab region, to confront the novel coronavirus (COVID-19) pandemic, have contributed to reducing the severity of emissions.

“The daily observations from the satellite show that the closure in Egypt led to an unprecedented decrease in nitrogen dioxide levels by about 25% in Cairo, but pollution has returned to normal levels after the closure was eased last June,” said Jenney Stavrakou, Atmospheric scientist at the Royal Belgian Institute for Space Aeronomy (Brussels).

Stavrakou said that a similar decrease in nitrogen dioxide was observed in large cities such as Istanbul and Algeria, while the decrease in Baghdad and Kabul was higher, reaching 30-35%.

The researcher said that there is a need to conduct careful research to better understand the effects of the transformations caused by the COVID-19 on human activity. These should then be translated into solutions to reach cleaner air.

“Besides its tragic dimensions, the crisis provides a powerful case for accelerating joint efforts to achieve long-term improvements in air quality,” Stavrakou added.

Mourad said that Egypt’s Ministry of Environment has expanded the environmental monitoring system and doubled the number of stations to 106 stations. Multiple pollution control programmes have been implemented also, and have been effective to reduce lead pollution, whose concentration of safe levels decreased two decades ago.

Supporting the electric power generation sector to use natural gas as the main fuel, contributed also to the emission control plans. The ministry has also introduced some initiatives for monitoring and follow-up of major industrial sectors. This includes electronically linking 74 major industrial establishments to the Ministry of Environment to conduct around the clock monitoring of emissions from 350 chimneys.

Mourad notes that some of the projects implemented in the transport sector have also contributed to reducing pollutants, such as expanding the public electric transport. He explained that the construction of Cairo’s third metro line has resulted in a 3.4% reduction in particulate pollution in the areas surrounding its route.