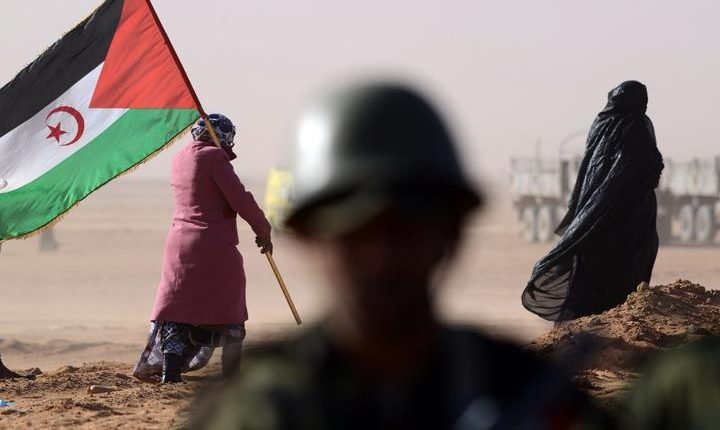 Egypt’s Foreign Minister Sameh Shoukry phoned his Algerian and Moroccan counterparts, on Saturday, to follow the developments of Guerguerat village dispute in the Western Sahara, according to a statement by the ministry.

The statement added that Egypt closely monitors the situation and make necessary contacts to preserve stability in the region.

The Royal Moroccan Armed Forces deployed, on Thursday night, security forces to secure the flow of goods and personnel through the buffer zone of Guerguerat, the Moroccan army said in a statement on Friday.

It came after the Polisario Front, abbreviation of Popular Front for the Liberation of Saguia el-Hamra and Río de Oro, had blocked the movement of people and goods across the Moroccan-Mauritanian border, which is surrounded by UN-mandated buffer zone, the Moroccan army said.

It added that the Mauritanian economy was negatively affected, with several Moroccan vehicles being stranded in the desert.

In a statement by the Moroccan News Agency, the Moroccan army stressed that the operation “has no aggressive intentions … and is based on avoiding any contact with civilians and not resorting to the use of weapons except in the case of legitimate defence.”

For its part, the pro-independence Polisario Front declared that the three-decade ceasefire in the disputed area was over on Friday after clashes with Moroccan troops that launched an operation to reopen a road to neighbouring Mauritania.

“War has started, the Moroccan side has liquidated the ceasefire,” senior Polisario official Mohamed Salem Ould Salek told AFP, describing the action by Morocco as an “aggression”.

“Sahrawi troops are engaged in legitimate self-defence and are responding to the Moroccan troops,” said Ould Salek, who serves as Foreign Minister of the Polisario-declared Sahrawi Arab Democratic Republic.

Morocco previously warned the Polisario Front, on Thursday, about the repercussions of the decision to block the passage of goods and individuals through the Guerguerat crossing point linking the Kingdom and Mauritania.

On the other hand, Algeria denounced, on Friday, the move by Morocco considering it “a serious violation” of the ceasefire in Guerguerat, according to a statement by Algerian Ministry of Foreign

It also called for the “immediate cessation” of these military operations and called on the two sides “to show responsibility, restraint, and full respect for the military agreement No. 1 signed between them and the United Nations.”

It also renewed its appeal to the Secretary-General of the United Nations (UN) to appoint a personal envoy as soon as possible and to effectively resume the political talks, in accordance with the relevant resolutions of the Security Council and the UN Charter.

Chairperson of the African Union (AU) and President of South Africa, Cyril Ramaphosa, has been made aware of the growing tension between the Western Sahara and Morocco, arising from a dispute on the buffer zone.

In a statement on Thursday, the President has asked the two countries to ease tensions and return to negotiations.

He further urges all the parties to uphold the Settlement Plan, which provides for “a ceasefire” and the holding of a referendum for the people of Western Sahara to exercise their right to self-determination.

President Ramaphosa also called upon the UN Secretary-General to urgently appoint a special envoy to the Western Sahara to address all the underlying causes of tensions and assist with finding lasting peace in that region.

Western Sahara is a vast desert region on the Atlantic coast of Africa and a former Spanish colony, of which Morocco controls 80%. It is proposed to receive autonomy under Moroccan sovereignty, while the Polisario Front backed by Algeria demands its independence.

Morocco annexed Western Sahara in 1975, and an armed conflict broke out between the two sides that lasted until the ceasefire in 1991.

Guerguerat is a buffer zone in which a UN peacekeeping force conducts regular patrols. In the past, it witnessed tensions between Polisario and Morocco, especially at the beginning of 2017.

For decades, the UN has sponsored efforts to find a political solution to the conflict. At the end of October, the Security Council extended the mandate of the UN Mission for the Referendum in Western Sahara (MINURSO) for another year. The resolution called on the conflict parties to resume negotiations, stalled for many months, in which Mauritania and Algeria are also participating.