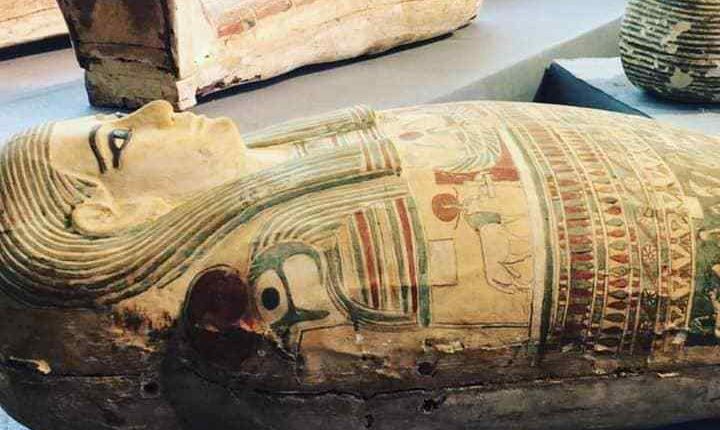 Egypt’s Minister of Tourism and Antiquities Khaled Al-Anani announced, on Saturday, that an Egyptian archaeological team has discovered over 100 coffins and 40 funerary statues at Saqqara necropolis.

The ancient sarcophagi and statues that were buried more than 2,500 years ago were displayed in a makeshift exhibit at the feet of the Step Pyramid of Djoser at Saqqara.

This was the second archaeological discovery in less than two months.

The Minister pointed out that the coffins revealed on Saturday will be moved to the Egyptian Museum in Tahrir, the Grand Egyptian Museum, and National Museum of Egyptian Civilization.

He added that Egypt will announce another discovery in Saqqara by the end of December or in early January.

The Egyptian archaeological mission announced, during the past years, a number of important archaeological discoveries in Saqqara, the last of which was the discovery of 59 coloured sarcophagi containing mummies in good condition for top officials and priests from the 26th dynasty.

The Minister noted that they only unearthed 1% of Saqqara necropolis’ monuments.

During the press conference, archaeologists opened a coffin with a well-preserved mummy wrapped in cloth inside. They also carried out X‐raying visualising the structures of the ancient mummy, showing how the body had been preserved. Also a short video was played for the drilling and excavation works in Saqqara.