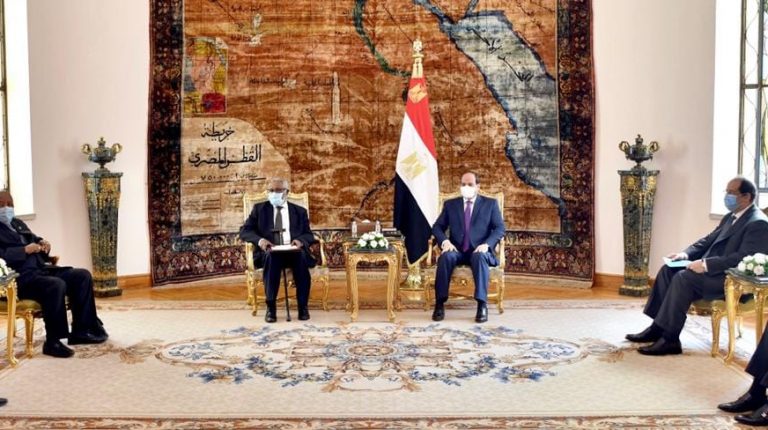 Nujoma, who ruled Namibia from 1990 to 2005, was the first president of the country after its independence. He is currently a peace activist who was recently awarded the Kemet Boutros Ghali Foundation’s peace award for his efforts in conflict settlement in Africa.

Chief of the Egyptian General Intelligence Service (GIS), Abbas Kamel, and the Namibian Ambassador to Egypt have attended the meeting as well, the Egyptian presidency said in a statement.

Both Al-Sisi and Nujoma exchanged views on various African issues, especially the dispute over the Grand Ethiopian Renaissance Dam (GERD). Nujoma affirmed his country’s support to Egypt’s political efforts to solve this issue through negotiations in a manner that achieves the interests of the three involved countries; Egypt, Sudan, and Ethiopia.

President Al-Sisi affirmed the Egyptian position that seeks to reach a legally binding agreement on the GERD, which would preserve Egypt’s water rights and meet the aspirations of other countries in development.

During the meeting, Nujoma praised Egypt’s support to peace and security in Africa and its role in the African Union’s (AU) campaign on “Silencing the Guns in Africa by 2020” which aims to achieve a conflict-free Africa.

He further pointed to the appreciation that Egypt enjoys in Namibia and the African continent for its historical support to independence causes over the past century.

Egypt is also appreciated in Africa for supporting various African issues at the bilateral and continental levels. “It was clearly embodied recently during the fruitful Egyptian chairmanship of the AU in 2019.”

Also on Saturday, Minister of Foreign Affairs of Zambia, Joseph Malanji, delivered a letter from the Zambian President Edgar Lungu to President Al-Sisi.

For his part, Al-Sisi stressed the importance of the Egyptian-Zambian relations especially on the commercial and economic levels and within the Common Market for Eastern and Southern Africa (COMESA).

“Egypt is keen to maximise coordination and consultation with the Zambian side, and President Lungu personally, regarding ways to enhance joint African action mechanisms, in a way that would contribute to achieving growth and stability in Africa,” Al-Sisi told Malanji.

The Egyptian presidency stated that the meeting between Al-Sisi and Malanji also touched upon several bilateral and continental topics, including security cooperation and combating terrorism.