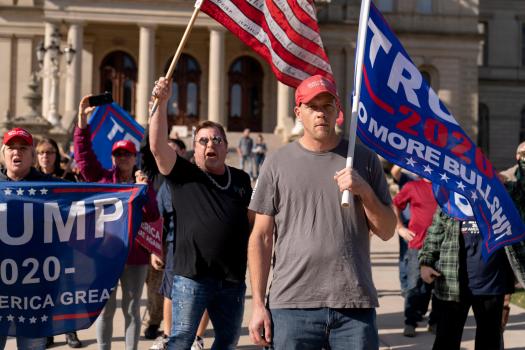 Street clashes erupted in Washington D.C., on Saturday, between supporters of outgoing US President Donald Trump and counter-protesters as tensions remain high over unsubstantiated claims of voter fraud in the recent elections on 3 November.

A least one person was injured while police made at least 20 arrests as the tensions extended to Sunday morning, according to US media. A variety of charges, including assault and weapons possession, were filed against those detained, officials said.

Two police officers were injured and several firearms were recovered by police.

Earlier in the day, Trump supporters marched through the US capital in support of his claims of electoral fraud. Trump has repeatedly claimed victory in this month’s election without providing evidence.

President Trump’s motorcade passed by the crowd shortly after the event began. Videos posted on social media showed the incumbent commander-in-chief waving from his car.

Later on Saturday, Trump tweeted there was “tremendous evidence” of voter fraud; however, he did not present any evidence.

US security officials dismissed Trump’s claims of a fix, saying last week’s White House vote was “the most secure in American history.”

But that didn’t stop some of those in attendance from falsely calling Trump the winner of the election or from sharing conspiracy theories about a movement to bring down the current president.

Protest organisers have given the rallies various names, including the Million MAGA March, the March for Trump, and Stop the Steal.

Organisers and right-wing media figures, along with the White House officials, have predicted a huge turnout. While the crowd was modest at the outset, the march gained steam in the hours that followed.

Many of those taking part in the pro-Trump rally did so without wearing face masks or socially distancing.

On Friday, the US announced a high in daily coronavirus cases of 184,000. Over 245,000 people have died in the United States of COVID-19 and more than 10 million people, including Trump, have been infected.

TikTok granted 15-day extension to reach deal with US buyers