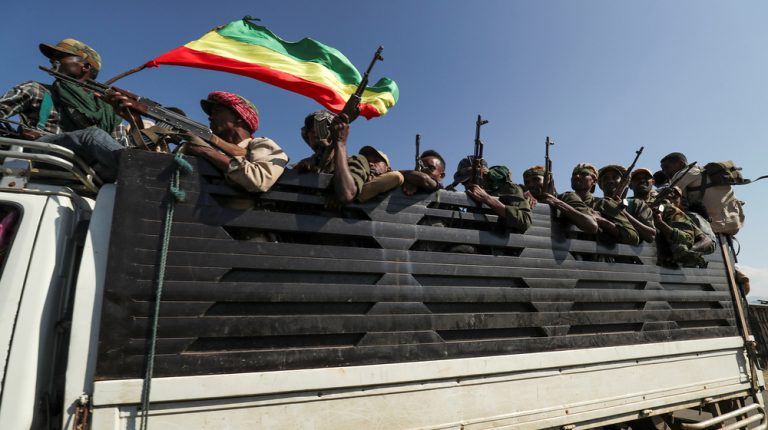 Ethiopia denied, on Monday, holding negotiations in Uganda with leaders of the restive Tigray region.

“The allegations made by several news outlets that Ethiopian officials will participate in the mediation talks with the Tigray People’s Liberation Front (TPLF) in Uganda are inaccurate,” the government said.

Ethiopian officials had indicated earlier that Ugandan President Yoweri Museveni would mediate between the Ethiopian government and the Tigray regional authorities, after the outbreak of military confrontations between the two sides in early November.

An official told AFP, on condition of anonymity, that Ethiopian Deputy Prime Minister Demiki Mekonnen Hassan, who also holds the Foreign Ministry, and representatives of the TPL F are expected to arrive in Uganda on Monday, to meet President Museveni.

Another official confirmed to AFP that the Deputy Prime Minister in Ethiopia will arrive in Uganda and meet President Museveni in Gulu, on Monday, and indicated that representatives of the Front attended.

None of the officials revealed the identity of the participants in the TPLF delegation, and whether the two delegations would meet directly.

On Sunday, the Ugandan website Chimpreports reported that talks will soon be held between Museveni and the two Ethiopian parties over the Tigray conflict.

Museveni has good relations with Ethiopian Prime Minister Abiy Ahmed, who on 4 November launched a military operation in Tigray after months of escalating tension with its authorities.

The Ugandan president, who has held office since 1986, also has relations with officials of the TPLF, which represents the Tigrayans’ minority (6% of the Ethiopian people) and for nearly 3 decades controlled the political and security levers in Ethiopia.

Since taking office in 2018, Tigray says that Ahmed, who belongs to the largest “Oromo” ethnicity in the country, has gradually marginalised the Front, which made it move to the ranks of the opposition.

Ahmed had declared war on armed groups belonging to the Tigray region, following disagreements between the federal government and the regional government over the date of holding general elections, which the government of Ahmed delayed for a year due to the coronavirus pandemic. Hundreds of people have been killed in the ongoing tensions.

The United Nations and the African Union expressed concern about the possibility of the fighting spreading to other regions in Ethiopia and destabilising the Horn of Africa region.