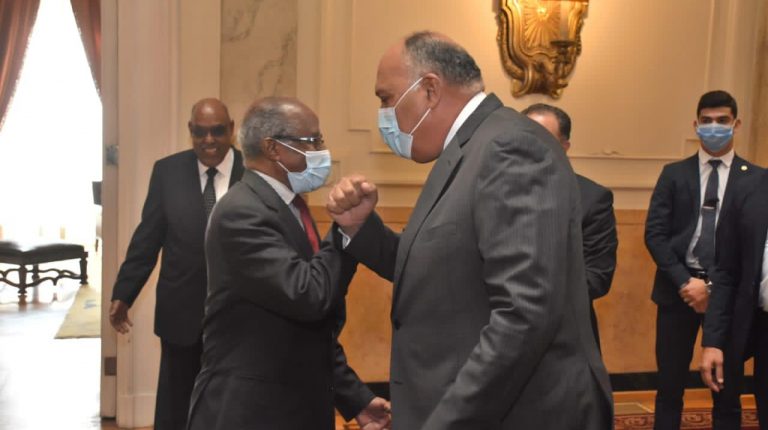 Egypt’s Foreign Minister Sameh Shoukry met, on Wednesday, his Eritrean counterpart Osman Saleh and Political Advisor to the Eritrean President Yemane Gebreab in Cairo. They discussed the latest developments in the Horn of Africa and the ongoing conflict in Ethiopia’s Tigray region.

Shoukry stressed Egypt’s support to peace and security in the Horn of Africa, as the region’s stability affect the whole continent, according to a press statement by the ministry.

As conflict rages in Ethiopia’s northern Tigray region, humanitarian groups sound the alarm over the threat of hunger in the area, as roads are blocked and airports are closed.

More than 36,000 Ethiopians have fled to Sudan through crossing points in Kassala and Gedaref states, as well as a new location further south at Aderafi, where Ethiopian refugees started crossing over the weekend, according to the UNHCR.

The Wednesday meeting also tackled ways of enhancing and developing relations between the two countries, especially in trade exchange and investment.  The two sides further exchanged views regarding the ongoing talks on the Ethiopian Dam.

The Eritrean Minister expressed his country’s aspiration to develop bilateral relations with Egypt on various levels.

The meeting comes at a time when the Horn of Africa and the Red Sea regions are witnessing constant challenges and escalating foreign intervention.

Egyptian-Eritrean relations started during Eritrea’s pre-independence days in 1991. During this period, Egypt moved to recognise the country as a separate state from Ethiopia, in addition to supporting Eritrea’s Revolution of Independence.

EU to set up operation to capture and destroy smuggler vessels