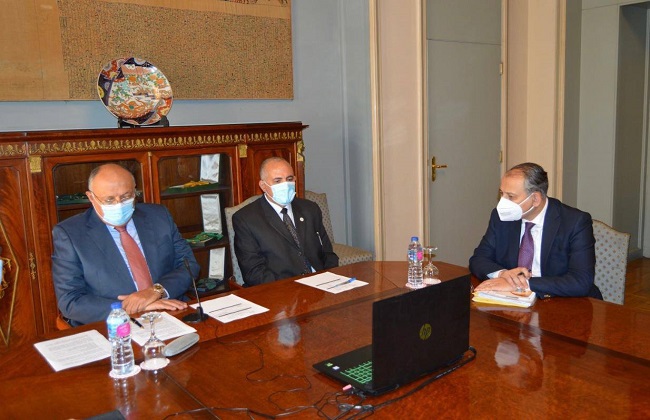 Egypt has asserted the importance of resuming negotiations on the controversial Grand Ethiopian Renaissance Dam (GERD), in order to reach a binding legal agreement on filling and operating the dam. The next round of talks will be held in the next few days, according to Thursday statement by Egypt’s Ministry of Foreign Affairs.

Another round of tripartite negotiations between the respective Ministers of Foreign Affairs, and Water, from Egypt, Sudan, and Ethiopia, kicked off on Thursday. The meeting was chaired by South Africa’s Ministry of Foreign, as the country is the current president of the African Union (AU).

Egypt emphasized the importance of resuming talks and reaching a legally binding agreement on filling and operating the GERD as soon as possible.

This, the Egyptian statement added, is being implemented as a result of the decisions reached in the AU meetings that were held over the past months.

Egypt’s Minister of Foreign Affairs Sameh Shoukry and Minister of Water Resources and Irrigation Mohamed Abdel Aaty highlighted the importance of applying the decisions from the AU meetings held over the past months.

Egypt has also expressed its aspiration to participate in the next round of talks, in order to reach a fair and balanced agreement that achieves the common interests of the three countries, and preserves their water right.

On Wednesday, the Egyptian Embassy in London organised a webinar with UK hydrologists and experts in African affairs, to discuss the Ethiopian dam negotiations. The webinar also sought to explain Egypt’s efforts to reach a fair agreement, and to highlight the dangers of failing to reach consensus on the dam’s filling and operation, Hafez said in another tweet.

Earlier this month, revived talks between Egypt, Sudan, and Ethiopia reached a stalemate when the three countries failed to agree on the framework under which the renewed talks would be carried out.

The last talks to be held, prior to this latest attempt at negotiations, were in August, when AU-mediated talks broke down following Ethiopia’s proposed package of non-binding guidelines for the dam’s filling and operation, which Egypt and Sudan rejected

In late October, Abdel Aaty said, during an interview with Sky News Arabia’s “From Cairo” TV programme, that Ethiopia is responsible for the failure to reach a comprehensive agreement on the dam’s filling and operation with Egypt and Sudan, which are located downstream along the River Nile.

Earlier this year, a US brokered tripartite meeting between the three countries, held in presence of the President of the World Bank (WB), failed when Ethiopia absented itself from the negotiations.

During the US-backed round of talks, tangible outcomes were agreed upon among the three parties concerning the rules and mechanisms of operating the dam. This also included the filling process for the reservoir during drought and prolonged drought. The Ethiopian and Sudanese sides, however, refused to sign the US/WB-drafted deal.