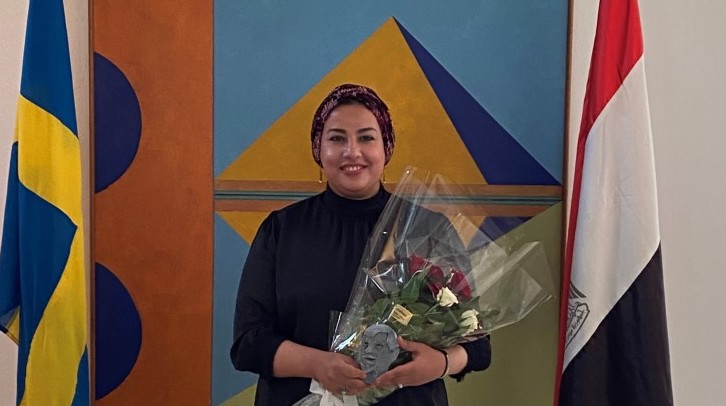 Swedish Ambassador to Cairo, Jan Thesleff, awarded, on 14 November, the 2020 EWK Prize to Egyptian caricaturist Doaa El-Adl. The prize is named after political cartoonist Ewert Karlsson and is given out by the EWK Society with the support of the union magazine Dagens Arbete.

For 20 years, the EWK Prize has put the spotlight on both Swedish and international satirists who promote the freedom of expression.

El-Adl is one of the most acknowledged cartoonists across the globe for her work that addresses women’s issues, including harassment and female genital mutilation, besides political issues.

The EWK Prize is valued at SEK 10,000 ($1,160). The prize is usually awarded during a prize ceremony at the Museum of Work in Norrköping, Sweden. Due to the COVID-19 pandemic, this year’s award ceremony instead took place at the Swedish Embassy in Cairo.

El-Adl was the first caricaturist in the Arab world to publish a caricature book that portrays women’s issues, under the title “50 drawings and more about women.”

She was graduated from the theatre and cinema décor department at the Faculty of Fine Arts. She first worked as interior designer in Damietta, and then she moved to Cairo to work as a graphic designer. In 2007, she knew that famous caricaturist Amr Selim, who was working in El Dostor Newspaper at the time, was looking for female caricaturists. One of El-Adl friends showed Selim some of her works and he liked them. She then joined El Dostor.

Over the years, El-Adl worked in several newspapers and magazines, including Sabah El-Kheir and Rose al-Yūsuf magazines. She now works at Al-Masry Al-Youm newspaper.

“I participated in many exhibitions in France, Italy, Spain, and Tunisia. I won a local award from the Journalists’ Syndicate for best caricature in 2009. I also received the Mustafa and Ali Amin award in 2015,” El-Adl said. “I won international awards as well: one for political satire from Italy, the Mahmoud Khalil award from Lebanon, Geneva Press Club from Switzerland, and many other awards from European countries. I was chosen by the BBC in 2016 as one of the 100 most inspirational and influential women around the world. However, Egyptian awards are the closest to my heart.”

El-Adl said that the EWK Prize came after she won the grand prize in the United Sketches’ Women Cartoonists International Award. This award gave her the opportunity to showcase her works at different museums in Europe, including Sweden, so she was selected for the EWK Prize.

El-Adl said the regimes ruling the world today no longer accept caricatures. She considers these awards as a support for caricatures and the freedom of expression. El-Adl asserted that she is very proud of this award.

She mentioned that the COVID-19 has negatively impacted the journalism industry all over the world, as people no longer go out to buy newspapers. This affected the publishing industry, especially caricature.

On the other hand, the pandemic accelerates the digital transformation and the usage of technology, so people began to relay on social media more than before. These online platforms helped caricatures spread on wider scale.

El-Adl explained that there are two schools for caricature. First one is when the caricaturist doesn’t choose the idea of his caricature, as there is an editorial board that chooses ideas, such as American caricatures.

The other school is when caricaturists think and come up with caricature ideas. she said that she prefer this school which is mostly followed in Egypt by famous caricaturists, including Bahgat Osman, Mohy El Din El Labad, El Leithy, Salah Jahin, and George Bahgoury.

Not to lose passion

Asked her about her aspirations in the caricature field, she said many told me that women cannot work in this field for more than three years. But now, my hope is not to lose passion for caricature as the journalism suffers across the world.

“I hope to keep in touch with the new generation of cartoonists, providing them with all means of support and encouragement like what I have received from previous generations,” she said.