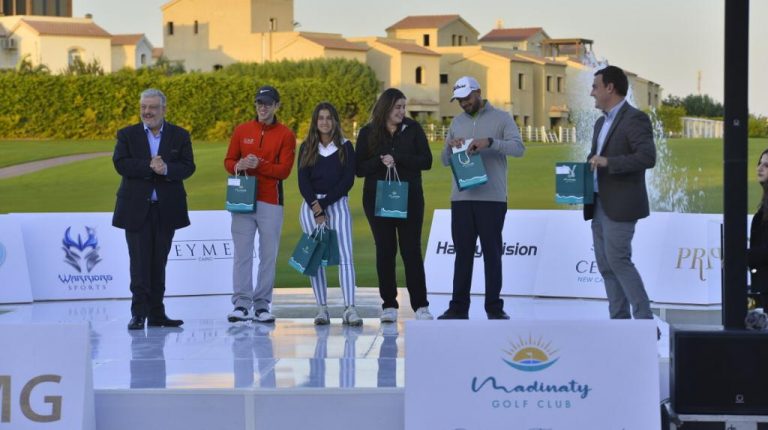 Abdel Moneim El Shafei, Gwan Jeong, and Thuraya Skrillo have won top prizes at the first edition of the Madinaty Open Golf Championship, which took place on 20-21 November, at the Madinaty Golf Course.

The results of the tournament are as follows:

Thuraya Skrillo scored 140 strokes, 2 times less than the assumed average, to come at the top of the women’s competition. Sophia Eissa and Dina Abu El-Ela came joint second, with 155 strokes each, an increase of 13 strokes over the assumed average.

Gwan Jeong led the men’s competition, after his success in achieving 135 strokes, scoring 7 strokes below the presumed average. He surpassed John Sainz, who scored 140 with 2 strokes less than the assumed average. Peter Roche, Carol Kim, and Mohamed Hemdan achieved the expected average 142 strokes to come in third place.

The Madinaty Open Golf Championship won wide praise in terms of its organisation, services, quality of courses, and competition between players. The praise was confirmed by Ayman Hussein, President of the Egyptian Golf Federation (EGF), who said that the tournament was top class in terms of organisation and hosting. He added that the course created significant challenges for the players, and raised intense competition between them.

Hussein said that the Madinaty Open Championship is a major addition to the game’s activities in Egypt. It also comes in line with the development policy pursued by the federation to expand and spread the base of the game and increase the number of its practitioners.

Hassan Ismail, who plays with Egypt’s national golf team, agreed with Hussein, and called on young people to practice golf as a game that teaches patience, passion and focus. He added that it is a sport that is practiced among large green areas and beautiful landscapes, as is the case with the Madinaty Golf Courses.

English player John Sainz described the organisation of the tournament as wonderful, stressing the quality of the Madinaty Golf Courses. He considers the tournament as among the best tournaments in which he has participated worldwide in terms of the professionalism, organisation, and the outstanding level of service.

Russian player Angelina Gordiko confirmed that the Madinaty Golf Course is one of Egypt’s best courses, and is one of the more difficult arenas in which to play. She added that it increases the strength of the competition, and as a result has become one of her favourites.

Over two days, more than 90 players from 10 countries competed in the Madinaty Open Golf Championship. The course itself has been designed according to the latest international standards and specifications by Robert Trent Jones Jr, one of the world’s most famous specialists in golf course design.

Jones has designed more than 270 golf courses in about 40 countries, with his designs considered among the best golf course designs in the world. The Madinaty Golf Course is managed by Troon Golf, one of the leading international companies specialising in the management and maintenance of golf courses around the world.