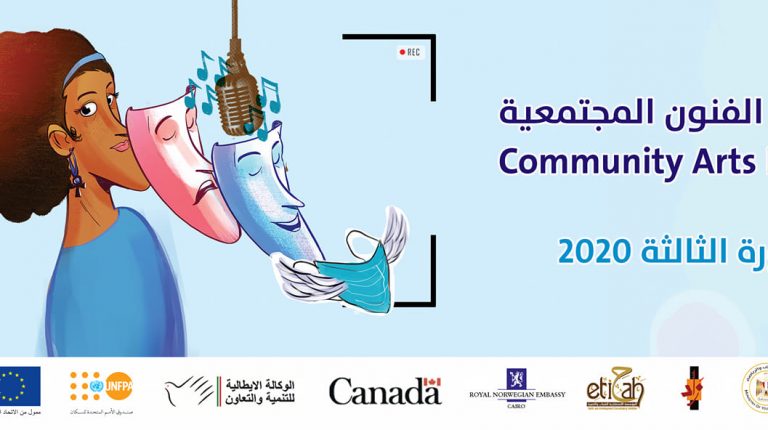 The Community Arts Festival, set up by the United Nations Population Fund (UNFPA), Egypt’s Ministry of Youth and Sports, and the Etijah Youth and Development Consultancy Institute, commenced on 21 November.

It was launched in collaboration with the Zad Art Team, with the support of the European Union (EU) and the Italian Agency for Development Cooperation.

The festival is set to run until 6 December at the Civil Education Center in Zamalek, and will also be live streamed on the UNFPA’s social media accounts, as well as those of the Etijah Institute’s.

The festival comes as part of the Ministry of Youth and Sports’ Population and Humanitarian Programme, operating in cooperation with UNFPA and Etijah.

The programme employs entertainment and art tools, which include music and interactive theatre, and aims to raise awareness on gender-based violence and family planning. Carried out at Population Clubs across Egypt, the programme also looks to highlight the concept of smaller families, and harmful practices against girls.

Using the power of interactive theatre to change social norms, a group of volunteers from Population Awareness Clubs and Safe Spaces in various governorates have benefited from the restrictions imposed by the novel coronavirus (COVID-19) pandemic and unleashed their creativity.

Population Awareness Clubs operate within different Youth Centers across the country under the Ministry of Youth and Sports’ umbrella. They host various activities on population issues and their impact on youth using different tools.

UNFPA also operates 14 safe spaces for women and girls in seven governorates, hosted with implementing partners such as CARE International and Etijah, within the Youth Centers.

The Safe Spaces operate with the support of various donors, including the EU, the Italian Agency for Cooperation and Development, and the Canadian and Norwegian Embassies in Egypt.

They are designed for women and girls to access gender-based violence response services, including psychosocial, legal, and referral to health services. They are spaces where they can also socialise and re-build their social networks, integrate with their peers, receive social support, and acquire different skills.

Thirteen theatre groups were established in the Safe Spaces and Population Awareness Clubs in 13 governorates, bringing together amateurs of all ages and genders.

The festival aims to spread awareness and highlight the main role that community theatre and the arts in general play in development.

It will feature 13 theatrical productions in addition to music performances, a result of workshops where participants worked on writing and directing these scenes.