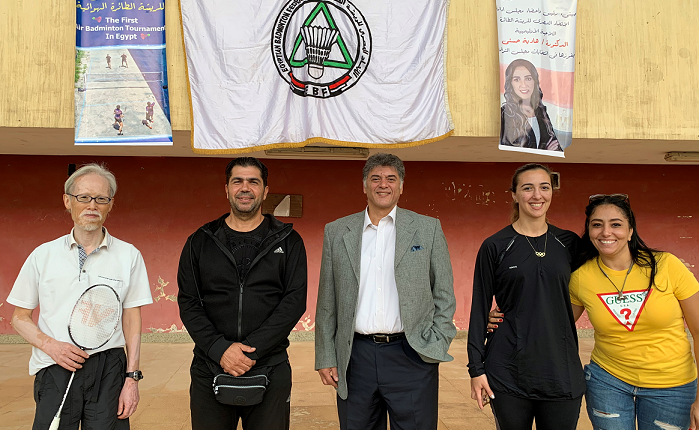 Japanese Ambassador to Egypt Masaki Noke has, on the invitation of the Egyptian Badminton Federation, attended the first Air Badminton Championship, which was held on 21 November at the Cairo International Stadium.

Also in attendance at the event was Hesham El Tohamy, President of the Egyptian Badminton Federation. The Ambassador played a friendly match during the event, which was organised by the Egyptian Badminton Federation to introduce Air Badminton, a new style of badminton, to Egypt.

Ambassador Noke was pleased and excited to be part of the event, and mentioned that he used to play badminton as a serious player when he was 16 years old. He added that he resumed playing the sport at 61 years old.

Badminton will be one of the events at the Tokyo Olympic and Paralympic Games, which will be held from 23 July 2021. The Japanese Government is intensively working with the International Olympic Committee to organise the games successfully, and is expecting the active participation of the Egyptian team.

On this occasion, Ambassador Noke announced that the Japanese Badminton Association is donating 80 used rackets to its Egyptian counterpart, as a gesture of goodwill. He expressed his hope that this donation would contribute to the spread of badminton in Egypt, and furthermore to contribute to strengthen the friendship between the two countries in the field of sports.

About 60 players from the Egyptian Badminton Federation participated in the successful event.