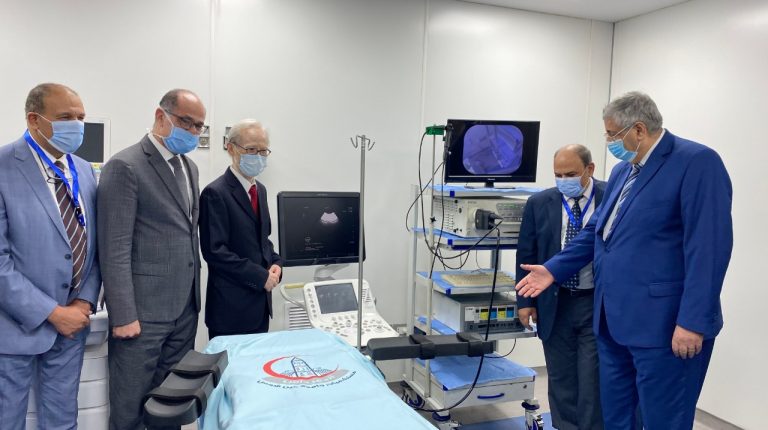 Japan’s Ambassador to Egypt Masaki Noke has attended a ceremony at Ain Shams University to handover medical equipment, including bronchoscope and ultrasound units, used in combating the novel coronavirus (COVID-19).

At the ceremony, Ambassador Noke expressed his hope that the Japanese manufactured equipment would serve the diagnosis and treatment of respiratory diseases, including COVID-19.

He also expressed the hope that the equipment would be used in the training of African medical experts, to improve their diagnostic techniques for neglected tropical diseases.

El-Metiny and other Egyptian attendees expressed their sincere appreciation of Japan’s commitment to supporting Egypt’s fight against the novel virus, and cooperation for training African medical experts at Ain Shams University.

The Egyptian side said that they would take full advantage of the equipment in dealing with the health crisis, as well as in developing partnerships with other African countries.

In his speech, Ambassador Noke stated that the current pandemic is a “human security” crisis, posing threats to people’s survival, livelihood and dignity, expressed his belief that we must leave no one behind. Based on the same belief, Japan is extending its supports to Egypt fighting against COVID-19.

As part of this, Japan has recently decided to provide a grant assistance of $9.5m for the procurement of medical equipment such as CT scanner, X-ray machines and electrocardiograms.

The country is also implementing its contribution of $1.6m, through UNICEF, for the protection of vulnerable population segments, through infection prevention and education support. It has also made a contribution of $2.7m through the UN Development Programme (UNDP), for the support of micro, small and medium enterprises (MSMEs), and the promotion of human rights.

Prior to the ceremony, Ambassador Noke visited the Department of Japanese Language at Ain Shams University, which has made significant contributions to the field of Japanese language education and academic exchanges with Japanese universities.

So far, nearly 50 Ain Shams students have received scholarships from the Government of Japan to study in the country.

This handover ceremony was organised to take place alongside the opening ceremony of the Respiratory ICU at Ain Shams University.