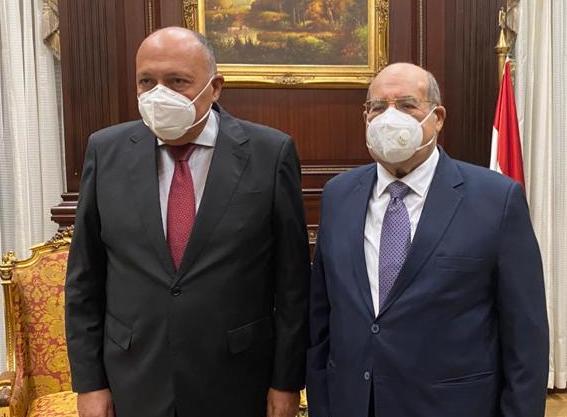 Egypt’s Minister of Foreign Affairs Sameh Shoukry met with Senate Speaker Abdelwahab Abdelrazek, on Tuesday, during a visit to the Senate headquarters.

Shoukry took the opportunity to congratulate Abdelrazek on his selection as Senate Head, following the successful completion of the chamber’s elections.

Abdelrazek’s appointment follows the formation of the first Egyptian Senate after the June 2013 Revolution, and implements the relevant articles of the country’s constitution.

The Minister of Foreign Affairs praised the role of parliamentary diplomacy and its credibility in terms of reflecting the people’s aspirations and ambitions. He also highlighted its role in strengthening bilateral and multilateral relations, especially at a popular level.

This takes place through cooperation with various parliaments around the world, as well as Egypt’s participation in various regional and international parliamentary federations.

The two sides also discussed the importance of cooperation and coordination between the legislative and executive authorities. It comes in light of the integration between various state authorities to achieve Egypt’s aspirations and protect the interests of its citizens. This all comes in implementation of the political leadership directives in this regard.

Shoukry emphasised his ministry’s full readiness to cooperate with Egypt’s parliamentary chambers, to contribute to achieving the desired stability and progress.

He noted that the Ministry of Foreign Affairs intends to continuously communicate with representatives of the people, to ensure transparency and the exchange of visions.

This relates to international relations and the aspirations of Egyptians, especially by caring for Egyptians abroad, through the efforts made by the country’s embassies and general consulates worldwide.