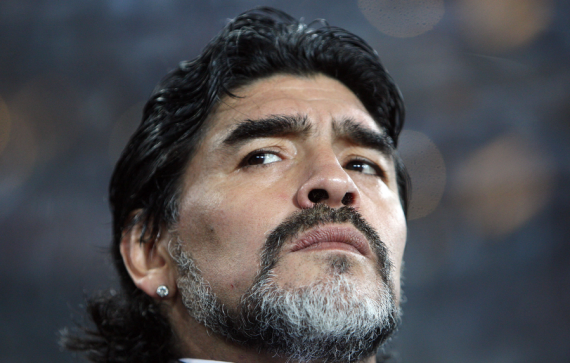 Following is the timeline of the life of Diego Maradona, who died of a heart attack on Wednesday at the age of 60:

On October 30, 1960, Maradona was born at the Polyclinic Evita Hospital in Lanus, Buenos Aires Province, to a poor family that had moved from Corrientes Province. He was the first son in his family after four daughters and has two younger brothers. He spent his childhood in Villa Fiorito, a shantytown on the southern outskirts of Buenos Aires.

Maradona started his football career at Argentinos Juniors, where he made his professional debut on October 20, 1976, and spent five years there. He scored 115 goals in 167 appearances before moving to Boca Juniors on a four-million US dollars transfer.

After spending only one season at Boca Juniors, Maradona landed in Europe and joined Spanish giant Barcelona for a then world-record fee of 7.6 million US dollars. Maradona won a Copa del Rey and a Spanish Super Cup with Barcelona in 1983.

In 1984, Maradona arrived in Napoli and was welcomed by 75,000 fans at his presentation at the Stadio San Paolo on July 5. He led the club to Serie A champion twice in 1987 and 1990, snapping the dominance of the league by clubs from north and center Italy. It was at Napoli that he reached the peak of his professional career and was even regarded as a hero of the city.

Maradona participated in four World Cups with the Argentine national team, among which the 1986 World Cup was remembered as his masterpiece. He played every minute of every game, scoring five goals and making five assists to lead Argentina to the champion. The quarterfinal against England was one of the classic matches in World Cup history, in which Maradona scored two contrasting goals to secure 2-1 win for Argentina. The majesty of his second goal and the notoriety of his first led to the French newspaper L’Equipe describing Maradona as “half-angel, half-devil”.

Maradona captained Argentina to another World Cup final in 1990, but an ankle injury affected his overall performance and Argentina lost 1-0 to West Germany in the final.

He left Italy in 1992 and joined Spanish outfit Sevilla where he stayed for one year. In 1993, he played for Newell’s Old Boys and in 1995 returned to Boca Juniors for a two-year spell.

For the coaching career, he was named the head coach of Argentina national team in late 2008 and guided the team in the 2010 World Cup, where Argentina was routed by Germany 4-0 in the quarterfinal stage. Maradona also stepped down as the Argentina coach after the World Cup.

He then coached Dubai-based club Al Wasl in the UAE Pro-League for the 2011-12 season. In 2017, Maradona became the coach of Fujairah before leaving at the end of the season. In May 2018, Maradona was announced as the new chairman of Belarusian club Dynamo Brest. He arrived in Brest and was presented by the club to start his duties in July. From September 2018 to June 2019, Maradona was coach of Mexican club Dorados. He was the coach of Argentine Primera Division club Gimnasia de La Plata from 2019 until his death.

On November 2, 2020, he was admitted to a hospital in La Plata, supposedly for psychological reasons.  A day later, he underwent emergency brain surgery to treat a subdural hematoma. He was released on November 12 after successful surgery and was supervised by doctors as an outpatient. On November 25, 2020, at the age of 60, Maradona died of a heart attack at his home in Tigre, Buenos Aires, Argentina.  ■