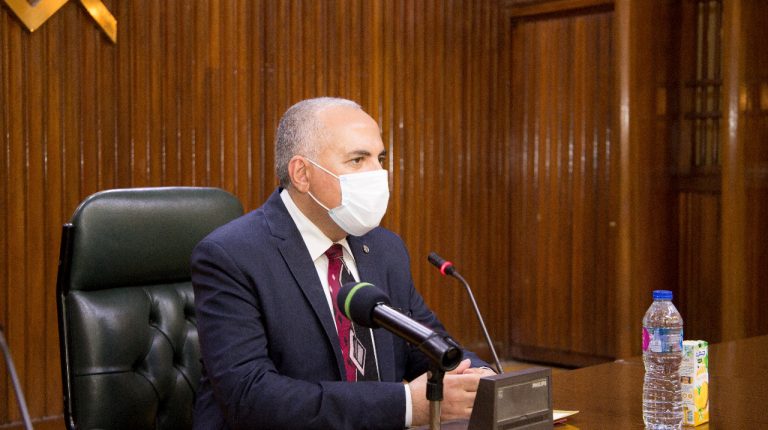 During the meeting, Abdel Aaty reviewed the state of Egypt’s canals, its lifting stations, and the extent of their readiness to deal with the rainy season and floods.

The minister emphasised the need to continue around-the-clock work to ensure the performance and efficiency of workflow in the authority’s departments. He also made note of the need for follow-up to confirm the purification of canals Nationwide.

The Ministry of Water Resources and Irrigation has undertaken various preparations and put in place measures, in coordination with the concerned authorities, to counter the dangers posed by the rainy season that some governorates are experiencing.

Moreover, the ministry has raised the state of public alert at all its affiliated agencies and sectors through a plan that includes full coordination between the concerned agencies to monitor the rainfall permanently.

Abdel Aaty emphasised the need for counting and preventing infringements in Egypt’s canals, whilst allowing for violations to be reported and prevented. Reports on violations will be sent to the military prosecution for the appropriate legal measures to be taken against violators.

The meeting also reviewed the position of projects that the ministry is currently implementing to benefit from agricultural drainage water. These have been put in place to maximise the country’s water resources.

At the forefront of these projects is the Bahr Al-Baqar Drainage project, which is being implemented at a cost of EGP 14.2bn, to treat about 1.7 billion m3 of the agricultural drainage water per year.

The minister also discussed progress on the Al-Mahsama drainage water treatment project, which has already been implemented at a cost of EGP 4.255bn, to treat 0.3 billion m3 of agricultural drainage water per year.

Furthermore, Abdel Aaty said that his ministry is currently preparing a study to benefit from agricultural drainage water in the main canals of West Nubaria, Al-Qalaa and Al-Khairy drains in the West Delta region.  These projects aim to confront climate changes and reduce the interference of seawater with groundwater in the delta.