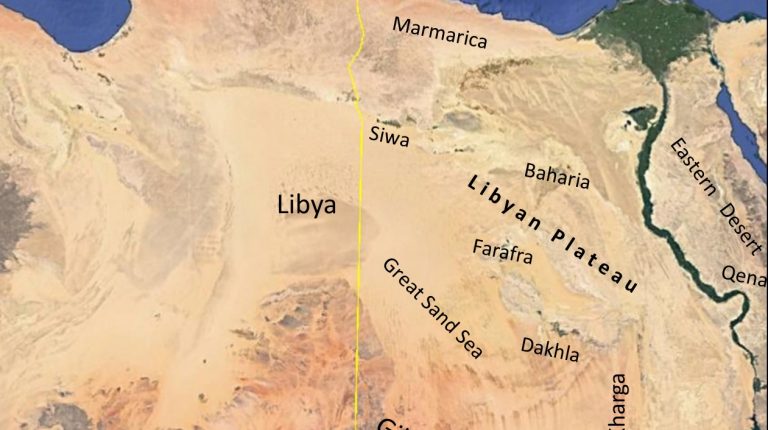 It is fascinating that, even now, many Egyptian geographers and geologists still refer to John Ball’s articles and books with high appreciation, despite it being written a century ago.

The modernisation project of the Alawiyya dynasty (1805-1882) relied heavily on many adventurers and half-qualified personnel, who came principally from France and Italy.

On the contrary, British rule in Egypt (1882-1952) counted principally on highly professional scientists, who came with valuable experiences in many fields. Among these experts was John Ball (1872-1941), who was not only a promising geologist and surveyor, but also a trained and talented geographer.

Ball dedicated himself to comprehensive research and extensive travel, to the extent that some of his colleagues in the imperial authorities named him “the Father of Egyptian Exploration”.

After 44 years of working in Egypt, Ball died in Port Said on 11 July 1941, after enriching Egypt’s geological and geographical sciences with authentic studies aplenty.

His work armed the imperial project with crucial analysis and results. Despite their associations, his research and results made a serious contribution to our knowledge and understanding of Egypt’s geography and geology.

From Derby to Helwan

Born in the English city of Derby, Ball started his career at the age of 14 as a junior draughtsman for the Liverpool Overhead Railway, where he was apprenticed to numerous national projects.

When he joined the School of Mines in London in 1891, he achieved such remarkable progress that he was granted a scholarship to study at the University of Zurich’s Royal Academy of Mines, Frieberg, from which he gained his PhD in 1897.

With the turn of the 19th Century, when Ball had gained good experience at different mines in the UK, Spain, and Germany, the British had established the Geographical Survey of Egypt to fulfil various geostrategic goals and tasks.

To realise this, the British authorities in Egypt recruited many promising scientists; hence John Ball was invited, in 1897, to join the newly established Geological Survey of Egypt, which was headed by H.G Lyons.

Personal reasons were also behind Ball’s welcoming to work in Egypt. He was nearly deaf, but as eager at the same time to have treatment for his tuberculosis. He was looking forward to living and working in Egypt’s dry climate, and specifically at the many healthy natural springs located at Helwan.

Utilising his experiences in mining, Ball commenced with research at the Bahariya Oasis in the central part of the Egyptian Libyan Desert, where he was first to record the iron-rich deposits in Gabal Ghorabi.

These efforts were documented in the 1903 book he co-authored with H Beadnell, entitled Bahariya Oasis: Its topography and geology.

Looking for gold in the crystalline rocks of the Eastern Desert, the British directed Ball to evaluate the old gold mines and potential opportunity of gold-bearing rocks which had been utilised in Egypt’s Eastern Desert since Ancient Egyptian times.

For these reasons, Ball spent the three years between 1905 and1908 patiently studying the basement triangle of what we now call the Shalatin and Halaib region. He also mapped a vast area around Gebel Elba around this time. The results were published in his pioneer book The Geography and Geology of South-Eastern Egypt in 1912.

To our day, the above-mentioned book exceeds its geological and mineralogical contributions in gold or other mineral resources, as it contains first-hand information about tribal and clan boundaries. It also includes the names and locations of desert wells and well known tracks across the mountains, the flora of dry valleys (wadis), and the principal activities of the Beja tribe.

Along the Red Sea’s coastal belt, Ball studied and published some reports about the economic geology of the phosphates deposits (1913), and the oil bearing formations (1916). 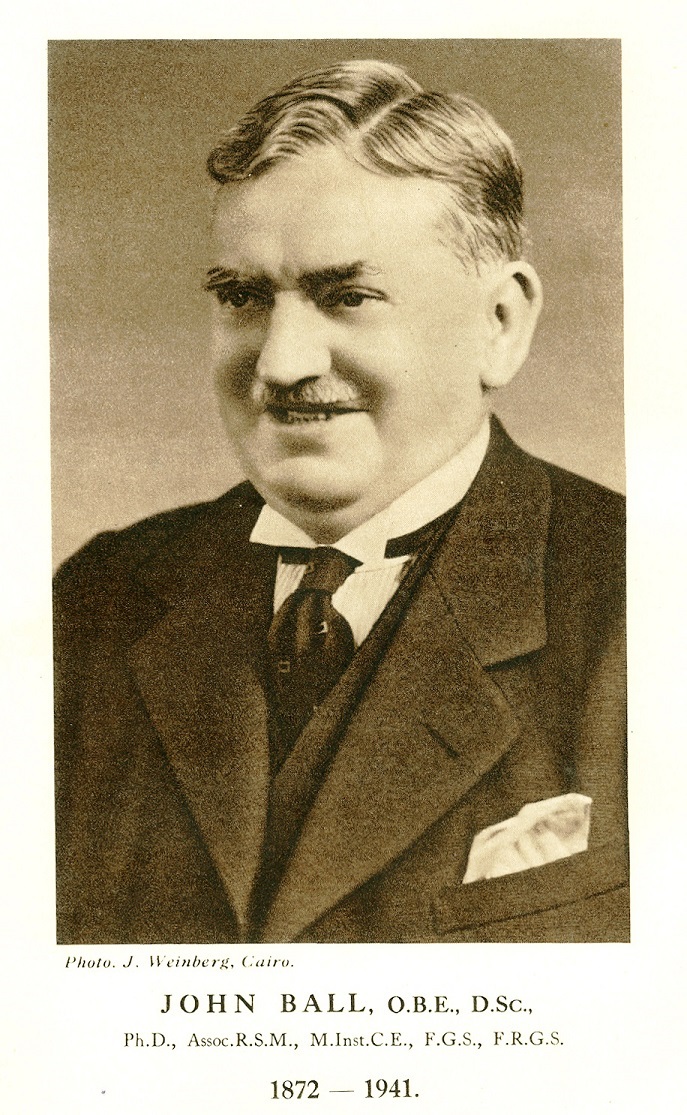 Three years before Ball’s arrival in Egypt, the Libyan Desert was vulnerable to many threats, especially when the Mahdist army invaded the Kharga and Dakhla oases, via Darb El-Arbain.

Moreover, the British established a telegraph connection and a railroad line between the oasis and the Nile valley, for quick mobilisation and effective defence mechanisms.

Amid these circumstances, Ball arrived to study Darb El-Arbain, which led to the publishing of his first scientific work in Egypt titled “Kharga Oasis: its topography and geology”.

Due to the fame he gained for his surveys, Ball was entrusted by members of the Egyptian Royal Family, particularly Prince Kamal Al-Din Hussein who gave Ball the opportunity to join him on some of his great journeys (1923 and 1926).

These journeys occurred across the Great Sand Sea and Gilf El-Kebir in the southern portion of the Egyptian-Libyan Desert, which reached as far as the famous landmark of Gebel ‘Uweinat on the south-western tip of Egypt and beyond.

With the outbreak of World War I, the Senussi militias of Libya invaded in 1916 the Egyptian portion of the Western Desert, in coordination and alliance with the Ottomans. The Senussi launched quick and successful attacks on Siwa, Bahreya, Farafra and Dakhla, and drove along the Mediterranean coastal belt of Egypt.

When these military threats culminated with the Turkish and German forces’ invasion of the Sinai Peninsula, Ball and other British scientists who were part of the Geological Survey of Egypt presented their knowledge about the warfare in the Western Desert.  They had worked hard to draw maps, measure distances, evaluate landforms, and their capabilities for different warfare processes.

It was a turning point in the discovery of Egypt’s military geography, when the British army in Egypt introduced “Light Car Patrols”  manned largely by Australians with narrow-tyre T model Fords. This campaign was sent out into unmapped areas west and northwest of Bahariya and Farafra.

Ball afforded them with the needed survey instruction and instruments, including his exclusive invention “sun-compasses”.

In 1916, Ball condensed all of this information into a 171 page report entitled “Military notes on Western Egypt“, which was presented to the Ministry of Defence in London.

On the Sinai front, Ball studied an important sector of the peninsula and wrote his unique book “The Geography and Geology of West-Central Sinai” in 1916. 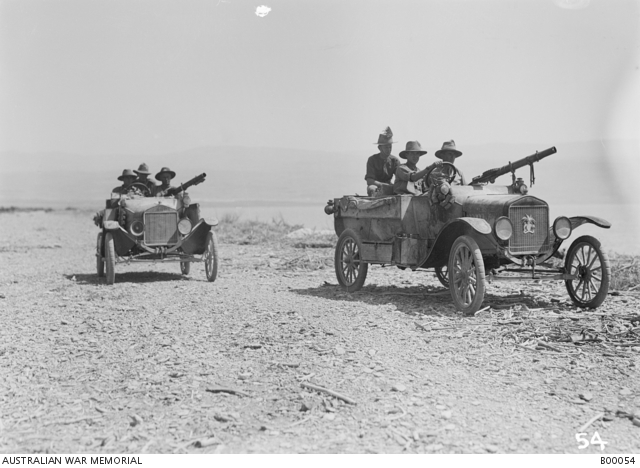 From Aswan to Alexandria

With the onset of the 20th Century, the British authorities supported the project to build a dam at Aswan, in order to ensure that Egypt’s cotton crop cultivation could flourish for the benefit of Britain’s cotton industry.

Ball was ready, as usual, and went to study the area. In 1901 to 1902, he recalled his qualification in engineering geology in both the construction of the Aswan Dam and in the artificial under-pinning of the temples at Philae, which would be affected by the high level of the River Nile following the dam’s construction.

Ball published all of this information in “Description of the First or Aswan Cataract of the Nile” in 1907.

In 1912, Egypt witnessed an amazing cosmic event when a meteorite traversed interplanetary space and landed in the northwestern portion of the Nile Delta, near Abu Hums in the vicinity of Alexandria. Ball quickly travelled to the spot, and collected the scattered meteorite stones giving them the name “Nakhlite” after the small village of Nakhla El –Baharia where the meteorite stones crashed. Ball wrote a scientific note on that event, and his paper remains the principal reference.

In November 1941, Nature published an obituary written by the famous earth scientist Karl Sandford who summarised Ball’s life in Egypt as follows:

“With the death of Dr John Ball, science has lost a man of outstanding character and calibre, whose experiences and contributions ranged over a wide field. His career was marked by hard work, enthusiasm, an inquiring and penetrating mind, a perception of essentials, with bold ideas and restless vigour. Ball loved a problem, and was relentless in pursuing it.”

Despite Ball not being well-known during his lifetime, he still received many honours, the most important of which were the Mejidie (for his work on the Aswan Dam and Philae), and the Victoria Medal of the Royal Geographical Society for his pioneer scientific analysis of the Libyan Desert.

Ball influenced many of Egypt’s native geographers in the post-colonial era, with the pioneering Egyptian scientists in the generation that followed Ball, such as Gamal Hamdan and Safi Eldeeen Abu-El Ezz, among many others, relying on his comprehensive books and papers.

Nevertheless, Ball is a unique example, and his achievements are pioneering for many reasons. Firstly, geographers in Egypt are traditionally qualified in post-colonial Egypt as if geography were a “social” rather than a “physical” science. Very few geographers have solid foundations and reliable training in mathematics, geology, engineering geology, as Ball did.

Ball was armed with many facilities that contributed to his field-work, including the new invention of cars for military motors patrols, and the imperial patronage of his discoveries.

Nowadays, most Egyptian geographers are engaged in time-consuming activities such as teaching geography at higher education institutions, with most badly in need of logistical facilities to develop their field surveys.

Hopefully, in post-independence Egypt, geography can overcome its current challenge of being stuck as an “armchair science”, with tendencies to reproduce theoretical rather than empirical analysis.