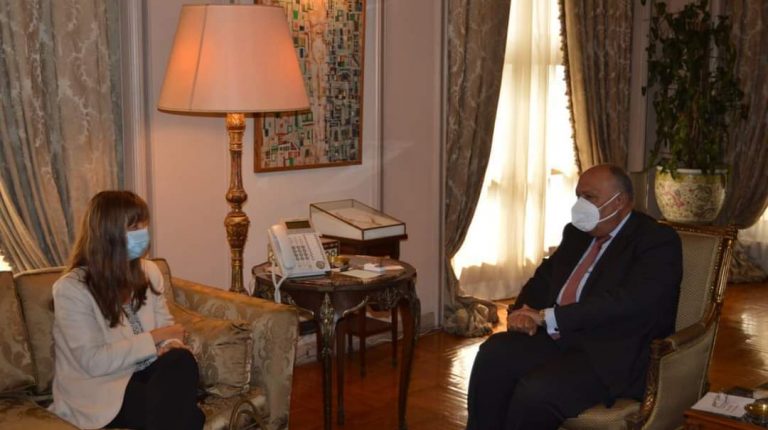 Egypt’s Minister of Foreign Affairs Sameh Shoukry has met with European Bank for Reconstruction and Development (EBRD) representatives to discuss methods of enhancing cooperation between the two sides.

Shoukry met with Heike Harmgart, Managing Director for the Southern and Eastern Mediterranean region at the EBRD.

During the meeting, the two sides reviewed the joint projects that are being carried out by the Egyptian government and the EBRD, as well as ways to enhance cooperation between the two parties.

Shoukry praised the growing cooperation between Egypt and the EBRD, with the country becoming the world’s largest country of operation for the bank. He noted the Egyptian government’s keenness to strengthen cooperation with the bank, in order to achieve the country’s development goals.

Moreover, Harmgart praised the performance of the Egyptian economy, and noted that the country had achieved the highest growth rate among the 39 countries in which the bank operates.

She confirmed the bank’s aspiration to enhance cooperation with Egypt, particularly in supporting the transformation to a green economy, enhancing environmental sustainability, promoting equal opportunities, and digital transformation.

Shoukry asserted that Egyptian companies will cooperate with the EBRD in implementing future projects across Africa, as they have the required knowledge and experience to do so.

Both officials participated in a virtual meeting with Bassem Kamar, Lead Economist in charge of the Southern and Eastern Mediterranean countries at the EBRD.

Also during the meeting, Shoukry presented the positive indicators achieved by the Egyptian economy in recent years. This included a review of the developments projects in the country’s business sector, in addition to the measures taken by the government to develop the investment environment.