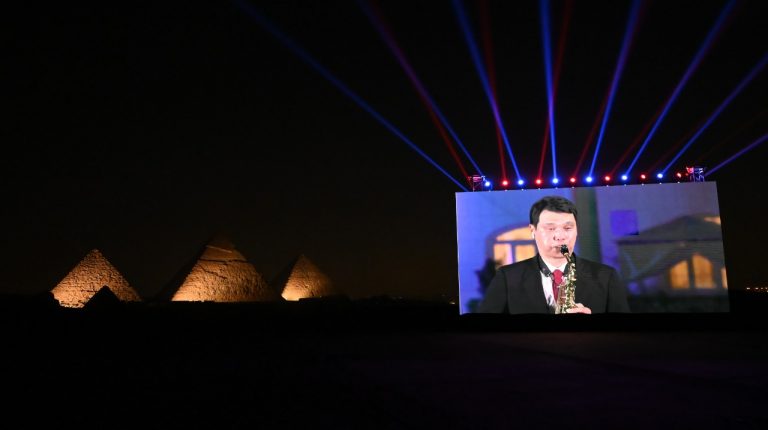 In a virtual ceremony from Egypt’s Great Pyramids of Giza, the Korean Embassy in Cairo launched celebrations marking the 25th anniversary of diplomatic relations between South Korea and Egypt.

Korean Ambassador in Cairo Hong Jin-wook took the unusual step of playing Egypt’s national anthem himself on the saxophone, while a group of Egyptian artists played the national anthem of Korea.

He also affirmed that Cairo would remain in the hearts of Koreans as a symbol of freedom and independence. The ambassador pointed to the Cairo Declaration, which was issued on 27 November 1943, and served as the first declaration recognising the Republic of Korea’s independence.

Moreover, South Korean companies export products bearing the slogan “Made in Egypt” to other countries in Africa and the Middle East, at a value of $700m annually. This and constitutes more than 90% of Egyptian electronics exports.

Ambassador Hong also expressed his hope that the comprehensive cooperative partnership between the two countries would be promoted to new heights. The partnership was adopted in conjunction with the historic visit of Egypt’s President Abdel Fattah Al-Sisi to South Korea in March 2016. It is set to receive a further boost through the Korean President’s visit to Egypt in the near future.

The Korean ambassador affirmed that Egypt’s long-term commitment and significant contributions to spreading peace in the Middle East constitutes an inspiration to South Korea.

He said the Korean government will continue its efforts to achieve complete denuclearisation, and establish a durable and stable peace regime on the Korean Peninsula.