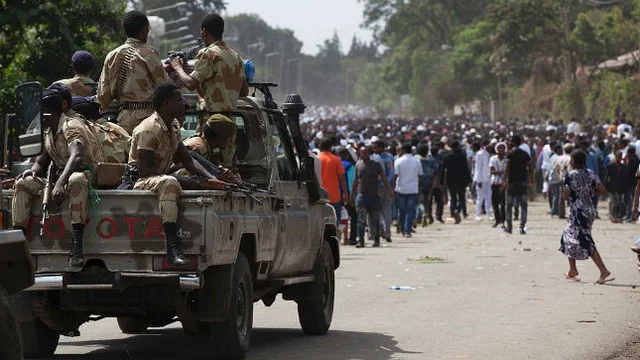 Six explosions hit Eritrea’s capital, Asmara, late on Saturday, according to the US Embassy in the city, as rockets were launched from the restive northern Ethiopian region of Tigray.

The embassy did not provide any further information regarding the cause of the explosions or their location.

Saturday’s rockets marked the third time the TPLF has attacked Asmara since the offensive against the region began on 4 November. The organisation accused Eritrea of supporting Ethiopia in the military operation against the Tigray region. Both Addis Ababa and Asmara have denied the front’s claims.

On Saturday, the Ethiopian National Defense Forces (ENDF) claimed that they have seized control of Mekelle, after days of bombarding the city. About 500,000 people live in Mekelle.

“I am pleased to share that we have completed and ceased the military operations in the Tigray region,” Ahmed tweeted.

He added, “Our focus now will be on rebuilding the region and providing humanitarian assistance while Federal Police apprehend the TPLF clique.”

The Ethiopian Prime Minister noted that the federal police will continue working to arrest members of the TPLF.

Last week, the Ethiopian army announced that it had restored its control on the town of Idaga Hamus, located 97 km away from Mekelle. Federal forces have also recently seized control of various towns and villages in the rebellious region, during aerial bombardments and ground fighting.

On 4 November, tensions between Ethiopia’s federal government and the TPLF turned into a military escalation as the front took control of a federal military base. The TPLF attack resulted in many deaths and injuries, and much damage to property.

Moreover, the federal authorities have shut down all facilities in the region, including electricity, telephone and internet services, and declared a state of emergency in Tigray.

About 30,000 of the region’s residents have fled as refugees into neighbouring Sudan since the start of the fighting.