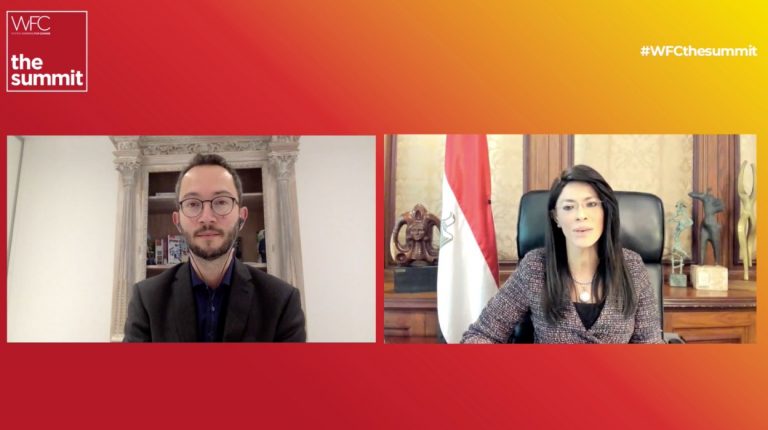 The novel coronavirus (COVID-19) pandemic has accelerated reforms, including the closure of the gender gap, according to Egypt’s Minister of International Cooperation Rania Al-Mashat.

The minister added that the accelerated reforms, a silver lining of the pandemic, will allow the country to build back better through inclusivity and the nurturing of diversity.

At the same time, the pandemic, which represents a global humanitarian challenge, has derailed the progress on achieving the UN’s Sustainable Development Goals (SDGs). It was, however, also an initiator to “The Great Reset”.

During the pandemic, Egypt was the first country to provide a women-specific response, launched by the National Council for Women (NCW). The country ranked in first place in the Middle East and West Asia regions, with 21 policy measures according to the UNDP COVID-19 Global Gender Response Tracker, Minister Al-Mashat said.

Her remarks came during the virtually held “Women Working For Change (WFC): The Summit”, organised by the Africa CEO Forum and co-hosted by International Finance Corporation (IFC). The event was held on 24 November under the theme “Imagine tomorrow. Change today”.

Minister Al-Mashat said that as per the Official Development Assistance (ODA) and SDG Mapping Framework, a comprehensive exercise was completed by the Ministry of International Cooperation, under its principles of Economic Diplomacy.

The ministry’s current portfolio of development financing has 13 projects, receiving funding of $82m that exclusively target SDG 5: Gender Equality. This comes in addition to other projects in the portfolio that achieve the same goal as a collateral effect to their development.

In 2020, the Ministry of International Cooperation has secured additional financing dedicated to SDG 5, worth a total of $7m, which will take place through bilateral cooperation with Spain and Canada.

“The participation of women is macro-critical,” Minister Al-Mashat said, “Economic inclusion and empowerment of women in development is essential to Egypt’s path forward.”

She added, “We must shift gears and change mindsets to be gender blind, in order to see competence as the sole determinant to what a person is capable of, not their gender.”

During the summit, Minister Al-Mashat took part in a one-on-one interview as part of the “Conversation with a Leader” segment, moderated by Nicholas Norbrook, Managing Editor of The Africa Report.

The minister spoke about changing mentalities across generations that will encourage the inclusion of women in high-ranking positions in the workplace. This will also encourage positive reinforcement in boosting female participation, as well as the role of education in closing the gender gap.

She added that these points require cooperation on several fronts. In July 2020, the Ministry of International Cooperation, the NCW, and the World Economic Forum (WEF), launched the “Closing the Gender Gap Accelerator”.

The accelerator is the first public-private collaboration model of its kind in the Middle East and Africa. It aims to help governments and businesses take decisive action to close economic gender gaps.

“Aiming to increase women’s participation in the labour force, close gender gaps in remuneration and investment, advance more women into management and leadership positions, and hardwire gender parity in the future of work,” the minister said, “The accelerator is built to take proactive action to advance women’s economic empowerment.”

She also said that knowledge is the source of competence. During the interview, the minister noted the importance of education at the heart of reform, especially when it becomes inclusive and reflects sustainable growth.

As per the “ODA SDG Mapping Framework”, the Ministry of International Cooperation’s portfolio of development projects include 36 dedicated to SDG 4: Quality Education. These projects have received total funding amounting to $2,361m.

Education in Egypt has been reformed to emphasise digital learning, technology and inclusion, ensuring both boys and girls have access to equal education in urban and rural areas.

An exemplar initiative of these reforms include the establishment of 12 Science, Technology, Engineering and Mathematics (STEM) High School for boys and girls across Egypt.

The project, established in 2011 and financed through USAID funding, taps on the pool of talented women who can lead the sectors of the future through cutting-edge technologies and research breakthroughs.

According to a 2018 UNDP report on Africa, if women entered the workforce at the same rate as men, the economic output would increase to $962bn.

The WFC is an Africa Forum initiative that brings together female executives with the belief that African women leaders are at the core of transforming the continent.