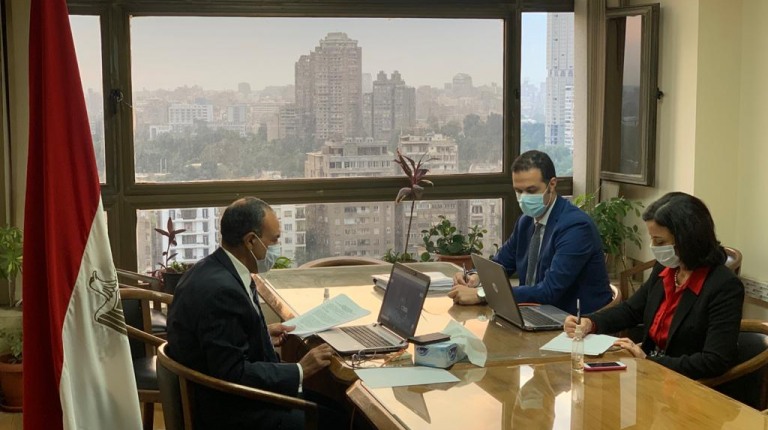 In his speech, Abdel-Aty pointed to the meeting’s great importance, which takes place at a time when Mediterranean region countries are looking to reformulate their cooperation relations into a real partnership.

This is based on the principles of constructive cooperation and joint ownership, taking into account the understanding of the concerns of the two parties, and achieving mutual benefit.

Abdel-Aty reviewed the intertwining challenges facing the Mediterranean region and Africa at the present time. In this regard, he highlighted the implications of the novel coronavirus (COVID-19) pandemic and the huge losses it has caused, both on the human and the economic levels.

The pandemic has also caused social pressures, in addition to other challenges. The list includes terrorism, irregular migration, climate change, and the rise of racist currents, in addition to hate speech worldwide. There has also come a need for global solidarity to confront these issues, with Abdel-Aty stressing at the same time the need to respect religious beliefs and not offend sacred symbols.

Abdel-Aty’s speech also dealt with the need to strengthen economic cooperation between the EU and Southern Neighbourhood countries, whose location represents a window to Africa. He noted the need to crystallise this cooperation in a way that contributes to achieving the priorities of Southern Neighbourhood countries, especially in agriculture, irrigation, health, industry, new and renewable energy, and reducing the trade deficit.

It will also see support provided to the transition to a low-emission economy, in proportion to the capabilities of the Southern Neighbourhood countries.

He also emphasised the importance of achieving peace and stability in the region to form the appropriate environment to advance development. As part of this, there is a need for political solutions to the region’s crises, foremost of which is the Palestinian issue. This should come in accordance with the decisions of international legitimacy and the two-state solution, which will lead to the establishment of a Palestinian state according to June 1967 borders, with East Jerusalem as its capital.

Abdel-Aty highlighted the Egyptian government’s distinguished performance, especially regarding economic reforms launched in 2016. These reforms have enabled the country to deal successfully with the repercussions of the coronavirus pandemic.

They have also highlighted Egypt’s success in achieving a growth rate of 3.6% during the current year, which was appreciated by many international financial institutions. The country’s successful growth comes as part of the government’s plan to harmonise the application of precautionary measures to prevent the spread of the pandemic and the continuation of economic activity at the same time.

Abdel-Aty also stressed the need for the EU to cooperate with Southern Neighbourhood countries and Africa in obtaining coronavirus vaccines. This would also see joint cooperation on making these vaccines available fairly and safely, without carrying additional economic burdens. This will come as part of the efforts made to enhance the comprehensive global confrontation of the pandemic.