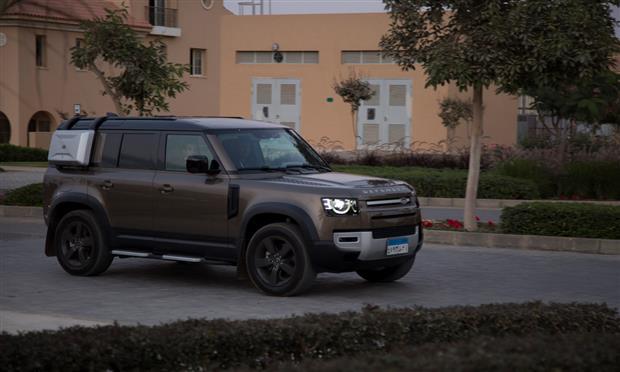 MM Group for Industry and International Trade (MTI), the exclusive agent for Jaguar and Land Rover brands in Egypt, has launched the Land Rover Defender model for the first time in the local market.

The company is offering a test drive for the new model, which will take place in the presence of the company’s Marketing and Sales Director Islam Tawfik and a group of journalists.

The Defender comes with a turbocharged 4-cylinder 2000 cc engine, that produces 300 hp and a maximum torque of 400 Nm at 4000 rpm. The engine is connected to an automatic transmission.

The Land Rover SUV accelerates from 0 to 100 km/h in 8 seconds, before reaching a top speed of 190 km/h. The engine consumes an average of 8 litres of fuel per 100 km. The new Defender features an advanced cabin that includes the Pro Pivi System, consisting of a 12.3-inch Driver Information Display that includes a 3D Navigation System.

The model also provides the driver with a ClearSight Under-Car View System as part of the 3D Surround Camera System.

The Pro Pivi system includes a 10-inch touch screen that supports Pro Navigation. The entertainment screen is connected to a powerful Meridian 400-watt audio system and 10 speakers, in addition to an amplifier. It provides wireless charging for phones and smart devices.

The model also offers an off-road system with electronic air suspension, that provides vehicle height control from 40mm to an extended height of up to 75mm in harsh off-road conditions, and provides an additional ride height of up to 70mm.

Tawfik said that this year, the company has faced several challenges due to the novel coronavirus (COVID-19) pandemic which has negatively affected the company’s sales. This has been particularly on the back of the closure of its European factories, which led to a decrease in the production of Land Rover and Jaguar vehicles.

He added that the company’s sales are constantly increasing, despite the current global health crisis, and has succeeded in increasing sales in 2020.

Tawfik also said that the Jaguar and Land Rover brands were initially not competitive, due to their being aimed at a specific consumer segment. Following the abolition of customs on European cars, the price of Land Rover and Jaguar models became more competitive against other brands.

He revealed that, in the past period, the company has begun to expand on its after-sales services by opening more centres across Cairo to meet the needs of customers. He also pointed out that the service centre in the Fifth Settlement area of New Cairo will be opened within two months.

He explained that the Jaguar brand also now provides five years of maintenance on all its models, which was put in place to change the consumer’s view of the brand. The measure also aims to reduce the expensive maintenance costs Jaguar vehicles often incur, in an attempt to attract a new segment of consumers.

Tawfik confirmed the company’s intention to launch electric cars soon, noting the importance of providing infrastructure for electric cars, government support for this project, and solving licensing problems, which are among the biggest obstacles facing electric cars. He revealed that the Land Rover brand has begun launching two hybrid models.