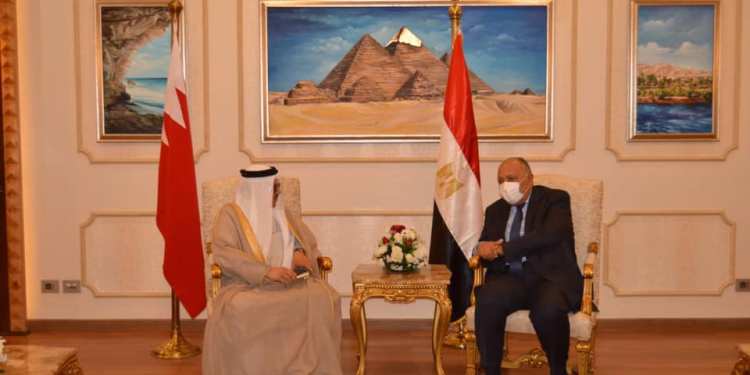 Egypt’s Minister of Foreign Affairs Sameh Shoukry asserted, on Monday, the country’s support for Bahrain and for the security and stability of the Gulf Cooperation Council (GCC) region.

During a meeting with his Bahraini counterpart Abdul Latif Al-Zayani in Cairo, Shoukry praised the level of cooperation between the two countries.

He also highlighted Cairo’s keenness to promote cooperation in various fields, upon the directives from the political leaderships of both Egypt and Bahrain. This cooperation aims to meet the aspirations of the two brotherly peoples.

Egyptian Ministry of Foreign Affairs Spokesperson, Ahmed Hafez, stated that during the meeting, both Shoukry and Al-Zayani tackled several regional and international issues of mutual concern.

The two ministers also discussed the acceleration of issues that require the rallying of joint efforts and coordination between Cairo and Manama. The talks between the two ministers have reflected conformity of viewpoints on issues of common interest, Hafez added.

Meanwhile, Al-Zayani expressed his country’s support for all of Egypt’s national security requirements. He noted that his country appreciates the Egyptian role in supporting stability in the region.

The Bahraini Foreign Minister also praised the pace of coordination and consultation maintained between the two countries.