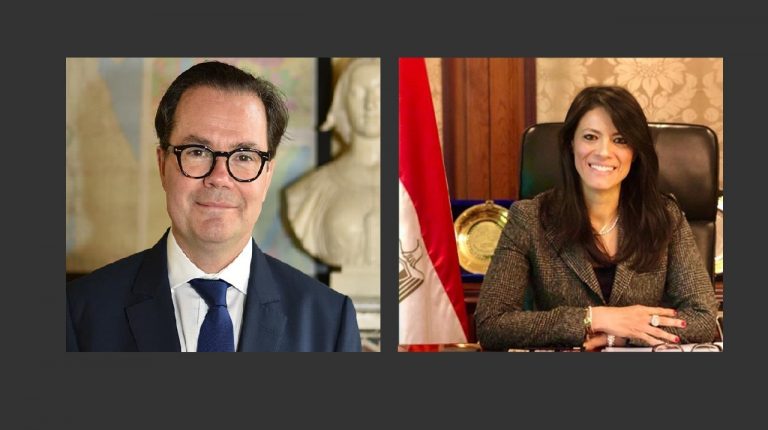 Egypt’s Minister of International Cooperation Rania Al-Mashat has met with France’s Ambassador to Egypt Stéphane Romatet to discuss methods of enhancing the bilateral cooperation between the two countries.

During the meeting, the two sides also discussed financing for a number of development projects, as part of efforts to develop and strengthen economic relations between Egypt and France.

Minister Al-Mashat praised the fruitful cooperation between the two countries as part of joint efforts to achieve the Egyptian government’s development priorities.

This has also seen support provided for efforts to achieve sustainable development, which has resulted in many agreements in vital areas such as transport; energy; agriculture; small- and medium-sized enterprises (SMEs); health; and antiquities.

The minister said that the coming period will witness the completion of several joint cooperation agreements in vital state sectors.

She also said that the Ministry of International Cooperation is looking to develop and strengthen economic relations with multilateral and bilateral development partners to support the development process in the country.

This is set to take place through economic diplomacy and its three principles, which are: the joint coordination cooperation platform; matching development finance with the UN’s Sustainable Development Goals (SDGs); and the strategy of listing international posts.

For his part, Romatet praised his country’s permanent coordination with the Ministry of International Cooperation, to strengthen development partnerships with government agencies.

He noted the French government’s readiness to strengthen cooperation within the framework of Egypt’s development priorities.

During the meeting, the Minister of International Cooperation reviewed the position of the priority development projects that are looking to receive finance. These are namely the Energy Policy Support Program worth €150m, as well as a grant for the same project amounting to €1m.

This is in addition to a Budget Support Program for the development of Egypt’s Comprehensive Health Insurance System with a value of €150m, which will also receive funding of €150m.

This comes in addition to financing of €12m and an additional grant of €2m to re-establish the French University of Egypt. Financing of €95m is also set to be provided to modernise the Tanta-Mansoura-Damietta railway line.

The two sides also discussed several other projects, including: a project to develop the Abu Qir railway line, worth €250m; a sewage treatment plant in Helwan worth €52m; and a programme for converting financing systems to the climate in Egypt with a grant of €1.5 m.

There are other partnership agreements between the Egyptian and French governments that will see a technical cooperation project implemented to support the teaching of the French language in public schools. This is set to receive a grant of €1.5m for its implementation.