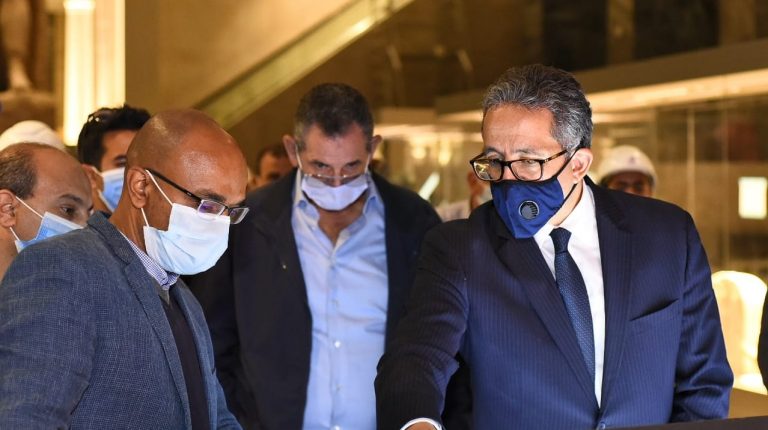 Minister of Tourism and Antiquities Khaled Al-Anani and Mohamed Amin, Adviser to the President for Financial Affairs, visited the Museum of Egypt’s Capitals in the New Administrative Capital (NAC), to monitor the progress of work there.

They were accompanied by: Mostafa Waziri, Secretary General of the Supreme Council of Antiquities; Ali Omar, Chairman of the Supreme Committee for Museum Display Scenario;  Mahmoud Mabrouk, Adviser to the Minister for Museum Presentation and members of the Committee;Moamen Othman, Head of Museums Sector; and Mona Raafat, general supervisor of the museum and officials of the ministry.

They reviewed the display cases for artefacts with Al-Anani directing for the Committee for Museum Display Scenario to undertake some changes in the content. This will conform with the display scenario in the museum, and also to amend the areas where some artefacts are displayed in accordance with the historical flow of the museum’s display to enrich it.

The minister stressed the need to adhere to the schedule set in advance for the completion of work in preparation for the imminent opening of the museum.

In the past few days, the museum has received a number of artefacts, including two carpets, one of which is made of wool, with a Persian text that reads: “Svazarhkashan”. In the middle of the carpet is a red and beige symbol.  As for the second carpet, it has floral and geometric motifs in navy and orange colours, bordered on the sides by two bands, with the middle of the carpet having a serrated camel in the centre. From this central image, floral and geometric motifs emerge.

The museum has also received ceramic pieces that simulate daily life in the form of their decorations and motifs representing Ancient Egypt. This is in addition to a bronze bust of Khedive Ismail, which enriches the section dedicated to displaying Islamic and Khedival Cairo, and the daily life in these eras.

It is worth noting that the Museum narrates the history of the Egyptian capitals through different eras, as it consists of a main hall in which the relics of a number of ancient and modern Egyptian capitals are displayed. A total of nine capitals are on show: Memphis, Thebes, Tell Amarna, Alexandria, Fustat, Fatimid Cairo, Modern Egypt,  Khedivial Cairo. This is in addition to displaying a group of different holdings that represent the patterns of life in each historical period for each capital separately, such as decorative tools, war and fighting tools, the system of government and various correspondences.

The second section of the museum is a pavilion that represents the afterlife in ancient Egypt. This part consists of the tomb of Tutu that was discovered in 2018 in Sohag. In addition to this is a hall displaying mummies and coffins, and which showcases canopic jars and a set of imaginary doors and alternate heads that simulate religious rituals in Ancient Egypt.

The museum’s display will use modern technology, where the exhibition galleries are equipped with screens displaying an interactive panoramic film showing the history, and an illustration of each of the ancient Egyptian capitals.