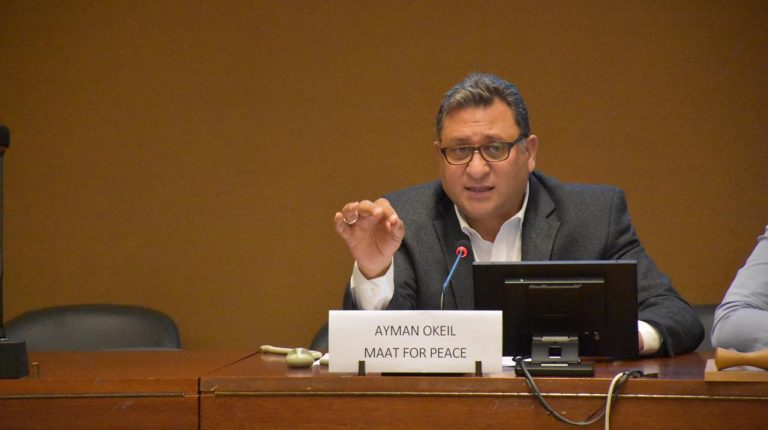 Egypt’s Maat Foundation for Peace, Development and Human Rights has renewed its complaint against Qatar to the United Nations Human Rights Council (UNHCR).

The renewal follows previous complaints made which the country’s authorities have ignored. Maat had submitted complaints based on the authorisations obtained from the concerned parties to submit urgent appeals and complaints to the special procedures demanding the Qatari authorities cancel the travel ban decisions.

The organisation has also called on Qatar to stop arresting its citizens, including a member of the ruling family, for only exercising their legitimate right and peacefully expressing their views.

Moreover, Maat submitted another complaint to the United Nations regarding the prevention of the Qatari citizen and businessman, Abdullah Ahmad AlMohannadi, who was arbitrarily detained for three weeks. He has also been banned from travelling, with the ensuing travel ban imposed on him by the Qatari authorities since 2013 without any reasons being mentioned.

In another complaint, Maat called on the Qatari authorities to remove the ban imposed on human rights defender Dr Najeeb Muhammad AlNuaimi, the former Minister of Justice. Al-Nuaimi is widely known for his critical positions of the Qatari government and its policies, which he has expressed peacefully through social media.

Al-Nuaimi was put on the list of those banned from travel on 8 January 2017, and he was informed of the ban via a text message sent to him from the Attorney General’s office in Doha. No reasons for the ban were provided.  On 4 June2017, the travel ban on him was cancelled by a court order, although he is still unable to actually leave the country.

The Qatari executive authorities continue to prevent Al-Nuaimi from travelling in an arbitrary executive procedure without any legal basis. This indicates that this decision has as a punishment for his political positions, in a clear violation of his right to freedom of opinion and expression, or to practice his work as a human rights lawyer.

Maat has sent a further complaint to the Working Group on Arbitrary Detention, regarding the arbitrary arrest of Muhammad Yusef AlSulaiti, and the unjustified travel ban imposed on him.

In the complaint, Maat denounced the dangerous and vulgar approach adopted by the Qatari authorities against its citizens.

It uses local laws restricting basic freedoms and contradicting  international charters and agreements signed by Qatar, especially the amended Law No 5 of 2003, regarding the establishment of the State Security Agency. AlSulaiti was detained at the agency for five months, and after his release, he remained banned from travelling.

Only two days after Maat sent a complaint about Al-Sulaiti to the UN, the Qatari authorities arrested him again, and til now, Al-Sulaiti is still under incommunicado detention. His Twitter account has also been deleted.

Maat affirms that the arbitrary measures adopted by Qatar against the four Qatari citizens violate the right to freedom of expression guaranteed in the Qatari constitution and guaranteed under international human rights law. It is also guaranteed under Article 19 of the International Covenant on Civil and Political Rights, which Qatar ratified under Decree No 40 of 2018.

The travel ban includes an explicit violation to Article 13 of the Universal Declaration of Human Rights, and Article 12 of the International Covenant on Civil Rights and Politics.

In light of the above, Maat calls on the UN to promptly intervene to pressure the Qatari authorities to stop all the arbitrary measures against the four citizens. The organisation also calls for the removal of their names from the travel ban lists and release the detainees from detention.

Maat also calls on the Qatari authorities to amend the vaguely-worded laws containing loose terms, which are used to restrict basic freedoms, especially the amended Law No 5 of 2003 on the establishment of the state security apparatus. This also includes the Community Protection Law for their apparent contradiction with the texts of international charters and the International Covenant on Civil and Political Rights and to adhere to its international obligations.

In this context, Maat president Ayman Okeil called on the Qatari authorities to stop the crackdown on peaceful protesters and opposition. He also called for the right to freedom of opinion and peaceful expression to be guaranteed, as required by international treaties signed by Qatar.

Okeil also demanded that the Qatari authorities immediately release all prisoners of conscience, who are deprived of their liberty for peacefully expressing their views on social media. He also demanded for travel bans to be lifted, and to drop the charges against them.

For his part, Sherif Abdel Hamid, Director of the Research and Studies Unit at Maat, reported that human rights defenders in Qatar face many restrictions, and difficulties. They are constantly harassed and abused by the government, which imposes restrictions on travel, and excessively practices arbitrary detention against them. The violations committed by the Qatari authorities against the four citizens set the best example.

Abdul Hamid also called on the Qatari government to guarantee freedom of opinion and expression for all Qatari citizens. The government should also review laws that may be misused for political purposes or for reprisals against activists and defenders. It should  ensure that all human rights defenders in Qatar, in all circumstances, are able to carry out their legitimate work in the field of human rights without fear of reprisal and without any restrictions.