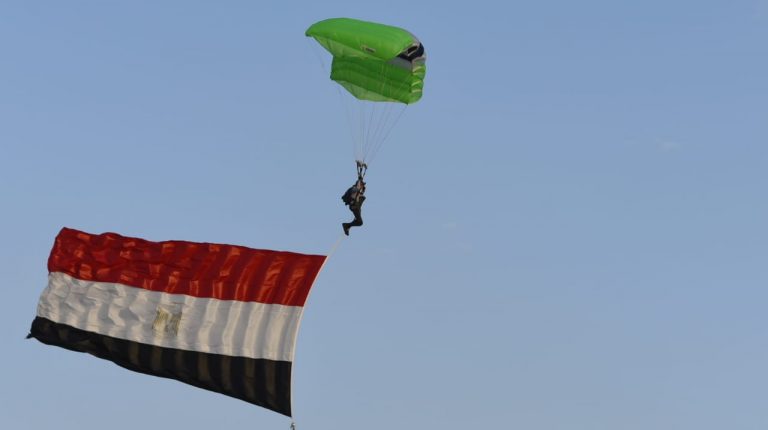 Minister of Tourism and Antiquities Khaled Al-Anani, Minister of Youth and Sports Ashraf Sobhy, and Minister of Civil Aviation Mohamed Manar Enaba attended a skydiving show at the Giza Pyramids, on Wednesday.

The event was organised by Tazkarty and Sky Dive, in cooperation with the three ministries.

It was held with the participation of a number of skydiving professionals from five countries, namely Egypt, the US, Spain, Italy and Slovenia. It came as part of the promotion of the most significant tourist and archaeological attraction in Egypt, the Pyramids of Giza

Sobhy highlighted the importance of sports and its influence in promoting and publicising prominent landmarks that characterise Egypt. This is particularly through special sporting events, such as skydiving. Sports also play an important role in increasing tourism, by showcasing Egypt’s cultural image to the world

He emphasised Egypt’s ability to host and organise major sports tournaments, including the upcoming World Men’s Handball Championship which will be held next January. The minister referred to Egypt’s administrative and organisational capabilities, which ensure its capabilities to achieve success in hosting various international events.

Al-Anani said that his Ministry promotes all tourism products, including sports tourism, which attracts different categories of tourists. He added that Egypt’s hosting of important tournaments contributes to increasing inbound tourism, and sheds light on the country’s various touristic offerings that caters to all tastes

He pointed out that the Ministries of Tourism and Antiquities, and Youth and Sports, are working together to organise such sports events to promote tourism in Egypt.