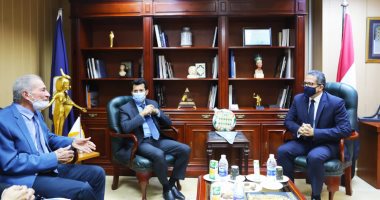 Egypt’s Minister of Tourism and Antiquities Khaled Al-Anani has met with Minister of Youth and Sports Ashraf Sobhy to discuss cooperation to promote the 27th edition of the 2021 World Men’s Handball Championship.

Also present at the meeting were International Handball Federation (IHF) President Hassan Mostafa, Egyptian Tourism Promotion Board CEO Ahmed Youssef, and a number of officials from the two ministries. The championship is scheduled to be hosted by Egypt from 13-31 January 2021.

The tournament is set to be one of the largest international sporting events during the novel coronavirus (COVID-19) pandemic, and will see the participation of 32 countries for the first time in the tournament’s history.

During the meeting, the two ministers discussed ways of promoting the tournament, whilst also promoting the diverse and unique offerings of Egyptian tourism.

They also discussed the possibility of organising tourism programmes for members of the teams participating in the tournament.

The ministers discussed how to use this tournament to promote Egypt’s tourism destinations, museums, and archaeological sites. They noted the importance of highlighting precautionary measures and hygiene and safety regulations implemented by the Egyptian government, to ensure the safety of citizens, tourists and workers in the tourism sector.

Al-Anani said that his ministry promotes all tourism products, including sports tourism, which attracts different categories of tourists.

He added that Egypt’s hosting of important tournaments contributes to increasing inbound tourism, and sheds light on its various touristic offerings that caters to all tastes.

Sobhy highlighted the value he places on the Ministry of Tourism and Antiquities’ role of in promoting and supporting sports events.

He pointed to its efforts in organising tourism programmes for foreign teams that participate in tournaments and sports events organised by various sports federations, in cooperation with the Ministry of Youth and Sports.

Sobhy added that Egypt has already become an important host for international sports championships, and pointed out that the World Handball Championship will be the most prominent in the history of that tournament. He attributed its significance to the number of teams that will take part in the event.

It is worth noting that both Sobhy and Al-Anani met last October to discuss methods of cooperation between their ministries. This cooperation has been aimed at promoting sports tourism, and how to benefit from international and local sporting events to promote Egypt.