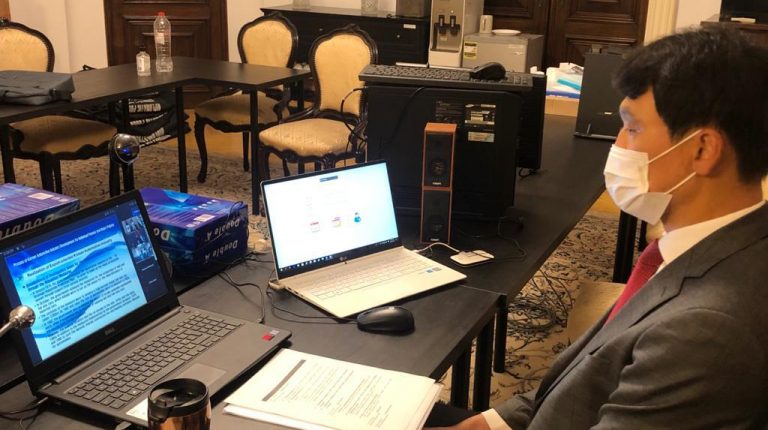 Ambassador of South Korea to Egypt Hong Jin-wook has praised the Egyptian economy’s great performance that has shown resilience and maintained positive growth rates amid the novel coronavirus (COVID-19) pandemic.

He added that it has performed particularly well compared to other countries in the Middle East and North Africa (MENA) region.

The Ambassador’s remarks came during a webinar organised by the South Korean Embassy, in collaboration with the Korea Institute for International Economic Policy (KIEP) and Egypt’s Ministry of Finance. The webinar focused on sharing South Korea’s extensive experiences in development.

The move comes in response to Egyptian President Abdel Fattah Al-Sisi’s directives to ensure the exchange of knowledge and experience with South Korea on developing policies for stimulating domestic consumption and encouraging people to replace and renew durable goods such as obsolete vehicles.

The webinar was attended by Ambassador Hong, Egypt’s Minister of Finance Mohamed Maait, and HazemFahmy, Egyptian Ambassador to Seoul. It reviewedSouth Korea’s industrialisation experiences, as well as the development of its automobile industry and policies for the shipbuilding industry.

Ambassador Hong highlighted the significance of this webinar, which comes as part of the South Korean government’s commitment to support and exchange expertise with Egypt. He added that this year is of particular importance, as it marks the 25th anniversary of diplomatic relations between the two countries.

Ambassador Hong expressed his admiration for the Egyptian government’s leadership and initiatives launched with the aim of mitigating the social and economic impacts of the COVID-19 pandemic.

He added that the presidential initiative Mayghlash Aleik (Not Expensive for You) will not only encourage domestic consumption, but  will also help factories increase production and generate more job opportunities, which is of paramount importance to Egypt’s inclusive growth.

The renowned think tank, KIEP, showed great interest in exchanging views with the Egyptian government. KIEP Director for New Southern Policy Department, Lee Kwon Hyung, said that the webinar is an opportunity to exchange views on means for industrial cooperation, particularly the automotive industry and shipbuilding which contributed to Korea’s economic growth and the great potentials to repeat Korea’s success in Egypt.

For his part, Minister Maait expressed his appreciation and thanks for the support of the Korean government and KIEP. He praised the improvement in Egypt-Korea economic relations over the past three years, noting the efforts exerted to increase Korean investments and ease obstacles facing investors.

Maait was briefed on the prospects of the Egyptian economy. He said that Egypt’s reforms have helped improve economic performance.

Despite the pandemic, Egypt’s economy was able to achieve a primary surplus of 1.8% of GDP, whilst narrowing the overall budget deficit to 7.8%.

It has also realised positive growth rates of 3.8%, which is the second highest worldwide. He added that there is improvement in Egypt’s business environment, owing to the automation of the customs and tax procedures. The minister pointed to the government’s initiatives launched to ensure a more equitable and fair distribution of growth.