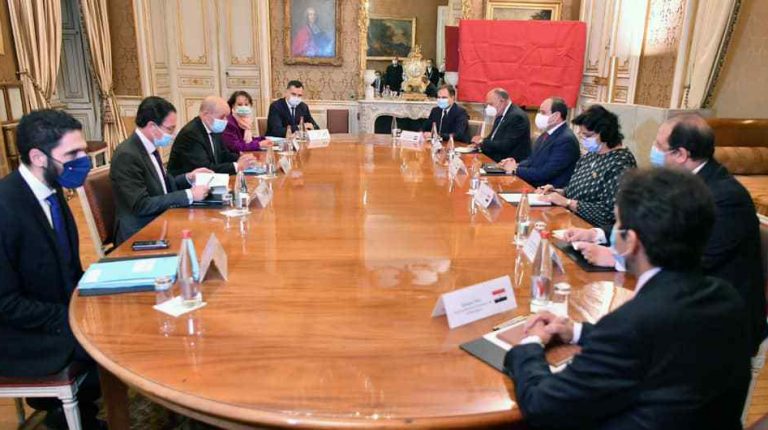 President Abdel Fattah Al-Sisi commenced his visit to France with a meeting with French Minister of Foreign Affairs Jean-Yves Le Drian in Paris, on Sunday evening.

The meeting addressed regional and international issues, as well as bilateral relations between the two countries. Issues of the eastern Mediterranean, Libya and Syria, and crises in several other countries in the region were also on the table during the meeting.

Al-Sisi affirmed that there is no way to resolve these crises except through the full support of the international community. This should take place with a view to restore and strengthen the institutions of those countries, so that they can return to their normal state, face foreign interference, and combat terrorism.

Le Drian expressed France’s aspiration to intensify joint coordination with Egypt on Middle East issues, in light of the strategic balance that Egypt has in the eastern Mediterranean and its regional surroundings.

He added that under the leadership of President Al-Sisi, Egypt has succeeded in restoring its effective regional pivotal role in just a few years. He pointed to the country’s success in achieving stability, security and combating terrorism, as well as the economic, developmental and social achievements.

Moreover, President Al-Sisi expressed Egypt’s keenness on its partnership with France, and aspiration for more consultations and coordination between the two countries on issues of common interest.

The two sides also reviewed developments of the Palestinian Cause and ways to revive the peace process. They both agreed to focus joint coordination to reach a fair and comprehensive solution that guarantees the rights of the Palestinian people in accordance with international references.