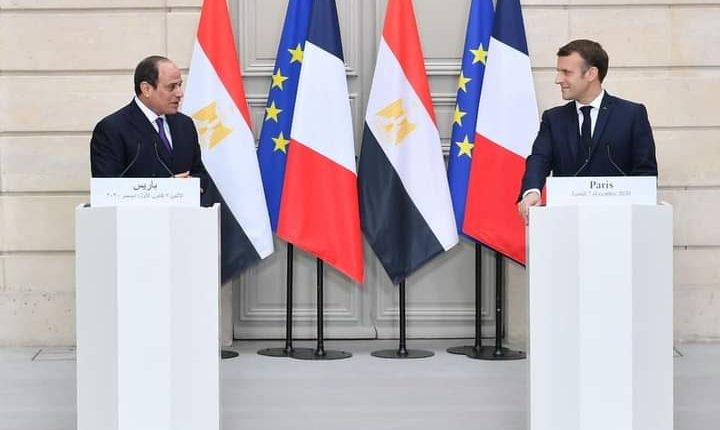 Egypt’s President Abdel Fattah Al-Sisi has met with his French counterpart, Emmanuel Macron, to discuss bilateral ties and the connection between France and the Muslim world.

During the meeting, which took place in Paris on Monday, the two leaders also tackled regional and international issues, whilst also addressing issues of mutual interest. This included counterterrorism, the Palestinian Cause, and the situations in Lebanon, Iran, and Libya.

During a press conference, President Al-Sisi stressed that coming to a political solution is the only way to achieve stability and security in Libya. Both leaders agreed on the need to dismantle militias in Libya and remove mercenaries which are present in the country.

Meanwhile, Macron praised his Egyptian counterpart’s support for France against the “hatred campaign against Paris.”

President Al-Sisi arrived in Paris, on Sunday, to hold political discussions with Macron and French officials.

The visit has come amid a continuing spat between France and the Muslim world, following the re-publishing of controversial cartoons depicting the Prophet Muhammed, and the latest measures against the Muslim community in France following the outrage.

During the conference, Macron described Al-Sisi as “an important partner in combating terrorism,” and praised the recent release of some civil society activists who had been in detention.

The French President said that he had discussed the issue of human rights in Egypt with President Al-Sisi. He noted that despite being a “lawyer of democratic liberality,” he rejects imposing any political or economic conditions on Egypt due to the human rights issue.

Moreover, President Al-Sisi rejected the description given to Egypt that it is an autocratic state ruled by oppression, and denied the presence of any political prisoners in the country.

He blamed the French media for describing Egypt’s leaders as oppressors who commit violence against the country’s citizens.

“We are facing a terrorist organisation that threatens the security of both Egypt and Europe,” Al-Sisi said, “We are struggling for a better future for our people in a highly turbulent region.”

Al-Sisi also said that Egypt supports human rights, and that the country has over 55,000 civil society organisations. He, however, must still “protect 100 million Egyptians from terrorism”, he noted.