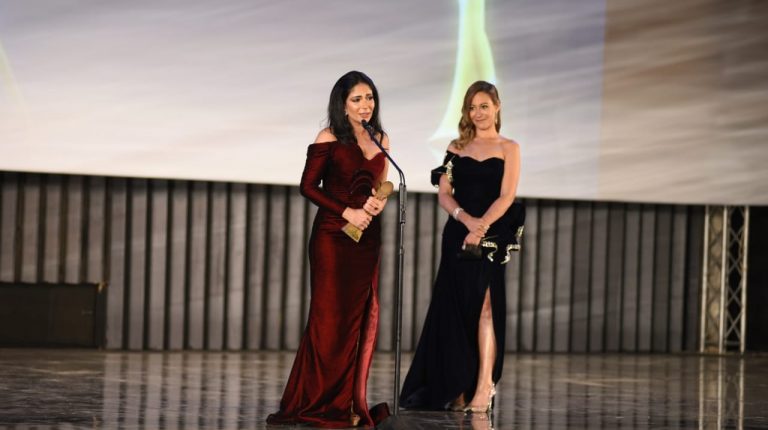 The 42nd edition of the Cairo International Film Festival (CIFF) kicked off last week, to become one of the few global cinema events to take place this year amid the novel coronavirus (COVID-19) pandemic.

Asserting the importance of arts, and especially cinema, the ten-day marathon gathering film lovers from Egypt and around the world defies the pandemic and the several challenges it has imposed on the film industry the world over.

Inside the legendary Cairo Opera House, journalists and photographers gathered to interview and take pictures of the celebrities who attended the red carpet opening, combining several local and international stars in various artistic fields.

The festival’s opening ceremony started with an artistic light performance, hosted by a prominent Egyptian actor and comedian Ashraf Abdel Baky. The actor presented a standup comedy sketch, using a mixture of sarcasm and on-point humour to shed light on the lives of film industry members during the pandemic.

Abdel Baky invited Egyptian superstar Tamer Hosny to join him on stage, and who later also performed a song in tribute to the cinema industry.

CIFF President Mohamed Hefzy underscored his keenness to hold this edition of the festival as well as to help return life to as it were before the pandemic. The global health crisis has halted film and TV productions worldwide, not just Egypt, and has led to the closure of many cinema houses.

Hefzy praised the Egyptian state for its determination to “bring life to its normal pace”. He also thanked the Ministries of Culture, and Tourism and Antiquities, for their support.

He expressed his happiness with the accomplishments of the festival’s team.

“Despite the great pressures and challenges imposed by the pandemic and the challenges of holding the festival in these times, we were able to provide excellent films from all over the world and also to hold the Cairo Industry Days,” Hefzy said.

He promised the Cairo audience that an outstanding programme will be presented, indicating that this year the programming team managed to include 84 films which are the latest and most important productions of 2020.

Hefzy also praised the Cairo Forum Cinema, whose funding this year exceeds $250,000 that will go towards funding future cinema projects.


Hefzy said that the team prides itself on being able to host 200 international guests despite the travel restrictions worldwide. He also honoured Egyptian director Sameh Alaa who scooped the top prize at the Cannes Film Festival. The filmmaker’s latest work, entitled I Am Afraid to Forget Your Face, won the Best Short Film Palme D’Or Award at this year’s event.

CIFF’s opening ceremony also screened a video showing pre-recorded messages of solidarity from the executives of three of the world’s top film festivals, namely Cannes, Berlin, and Venice, who also emphasised their support for Hefzy, the CIFF team, and the cinema audience in Egypt.

“You are brave to hold the edition,” Cannes director Thierry Frémaux said in his video.

Egypt’s Culture Minister Inas Abdel Dayem inaugurated the festival, and asserted the importance of arts and cinema in the lives of peoples all over the world.

“For months, arts, including cinema, have succeeded in being an outlet for people, after the COVID-19 pandemic imposed sudden house arrest on the world,” Abdel Dayem said.

The minister praised the Egyptian government for choosing “to take on the challenge of returning life to its normal pace, with a full commitment to applying precautionary measures required by Egypt’s Ministry of Health and the World Health Organization (WHO).

The opening ceremony later revealed the special programmes for this year’s festival, as 2020 is the year of Federico Fellini, who was born on 20 January 1920 in Rimini, Italy. This centenary has become a nationwide party in Italy that will be celebrated for the entire year via numerous events and festivals.

CIFF is joining several other festivals and institutions around the world and will hold a retrospective to honour the late Italian cinema veteran. Egyptian director Yousry Nassrallah remembered how his journey as a fan of Fellini started when he was a child.

Nassrallah said that Fellini created exceptional characters and also gave inspiration. Such was his presence and talent, however, that he also intimidated a lot of directors, due to his daring and brave tackling of everyday life.

“Fellini never shied away from portraying the secrets of his family, his love and fears. He filled my and others’ hearts with passion and joy,” Nassrallah added.

Moreover, the Faten Hamama Excellence Award was presented at the opening ceremony. This award is given to prominent film figures for their contribution to enrich the cinematographic art. A former winner of the award, Menna Shalaby, took to the stage to announce, “This year’s award goes to a star who opened the door for many actors of her generation and who inspired many with her roles: Mona Zaki.”

Accepting the prize, Zaki asserted that as a teenager when she was an amateur theatre actress, she often attended the CIFF. She added that it is a great honour to be awarded a prize carrying the name of the legendary actress Faten Hamama.

“I am also extremely happy to be honoured in the same edition that gives an award to Waheed Hamed, a veteran scriptwriter from whom I benefited a lot,” Zaki said adding that she also benefited from all her colleagues and every cinema worker she got the chance to share a location with.

The opening ceremony also saw the honouring of the British writer and director Christopher Hampton with the Golden Pyramid for Lifetime Achievement Award.

Hampton, who as a child spent several years of his life in Alexandria, dedicated his award to Egypt.

“I began in Egypt, in Alexandria,” he said, “My first step as a playwright was at school where my English teacher asked us to write plays and perform.”

He added, “My father used to take me to the cinema to watch films. I love this country and I am very happy to come back here.”

The opening ceremony ended with the honouring of the scriptwriting heavyweight Waheed Hamed, whose filmography testifies to his excellent talent in historicising Egypt’s social and political life in cinema, TV, and radio.

Sherif Arafa, a previous winner of the award, invited Hamed to the stage. It is worth adding that both Hamed and Arafa collaborated on several masterpieces in the 1990s.

Hamed thanked the audience as they are “the true film lovers”. He also thanked all the staff, crews, actors, writers, directors, and producers who worked with him.

He also paid tribute to the late CIFF artistic director Youssef Cherif Rizkallah, whom according to Hamed had a great impact in his professional career by introducing him to international festivals.

The opening ceremony ended with the screening of British-French film The Father, directed by Florian Zeller, in its first screening in the Arab world and Africa.