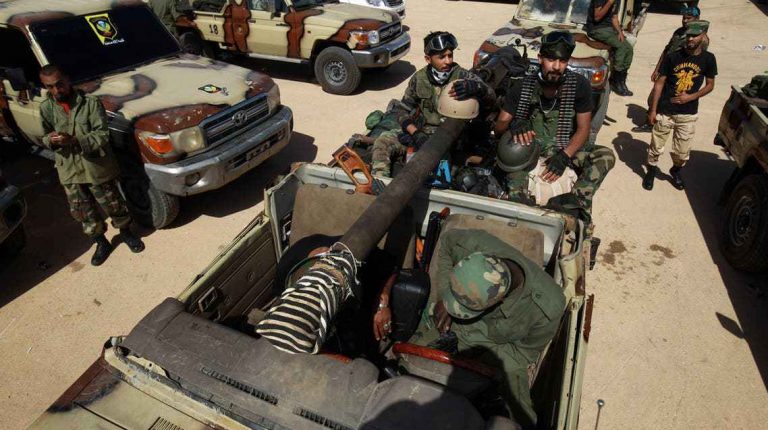 Libya’s Government of National Accord’s (GNA) Minister of Defence Salah Al-Din Al-Namroush said, on Monday, that the GNA will withdraw from the local ceasefire deal, which was brokered by the United Nations, if the Libyan Arab Armed Forces (LAAF) launches any attack.

Al-Namroush’s remarks come a day after the LAAF, headed by Commander Khalifa Haftar, expressed its concerns over “mobilisation of militias affiliated to the GNA and transportation of militias, arms and military equipment towards the demarcation lines west of Sirte and Al-Jufra”, according to a Sunday statement.

The LAAF has ordered all units to “be on a high degree of caution, and avoid to be drawn into provocations that could lead to a military escalation”.

It also emphasised its commitment to the permanent and complete ceasefire agreement that was signed by the rival Libyan parties following UN-facilitated talks in Geneva in October.

The October agreement stipulates that the ceasefire will be accompanied by the departure of all mercenaries and foreign fighters from Libyan territories, whether land, air, or sea. Their removal from Libya should take place within a maximum period of three months from the day that the agreement was signed.

Meanwhile, the LAAF said that “they [are monitoring the movements of] five ships that moved from Turkey near Libyan territorial waters, without entering them”.

According to the Syrian Observatory for Human Rights, the number of Syrian mercenaries in Libya has now reached 18,000. It added that Turkey is intending to deploy a new batch of mercenaries to the war-torn country in the upcoming days.

In the meantime, hundreds of members of Russia’s Wagner Group are operating in Libya with the LAAF, according to the UN.

Recent remarks by Libya’s various rival factions have sparked tensions over alleged attempts to hinder UN efforts aimed at reaching a political settlement in the Libyan crisis, and maintaining a ceasefire in the country.

Earlier in November, the UN announced that the political parties in Libya had agreed on holding presidential and parliamentary elections in December 2021, raising hopes for an end to the long-time conflict.

The holding of elections requires establishing a new and reformed Presidency Council, and an effective and unified Government of National Unity. These requirements have been outlined in the conclusion of the Berlin Conference, and adopted by UN Security Council Resolution 2510 (2020), according to the UN.