Egypt’s Minister of Youth and Sport Ashraf Sobhy has overseen many beneficial sport projects in the country during his tenure, with the latest of these successful projects the 2021 World Men’s Handball Championship, which will take place in January next year.

Sobhy sat down for an interview with Daily News Egypt to talk about the issues that remain a concern in the sector, following the package of decisions recently taken by the ministry. These include the decision to freeze the Zamalek’s Board of Directors, as well as a number of the boards of several other club and youth centres. These boards are in the process of being referred to the prosecution, for the appropriate legal steps to be taken.

President’s “Sport for All” Initiative

In the interview, Sobhy emphasised the importance of President Abdel Fattah Al-Sisi’s “Sport for All” initiative, and his unprecedented interest in sport. The President considers it a “national security” issue, with Sobhy highlighting that his ministry looks to implement it as a “way of life” that guarantees young people have health and strength.

The Minister talked about the “Egypt first … no fanaticism” initiative, stressing its positive impact on the Zamalek and Al Ahly derby match in a manner befitting the reputation of Egyptian football. The initiative continues, as during every November, the month will be devoted to celebrating the initiative until blind fanaticism is completely eliminated.

Sobhy went on to talk about the phenomenon of intolerance, saying, “Of course it is a social phenomenon, which is what motivated the Ministry of Youth and Sport and the Supreme Council for Media Regulation, headed by the journalist Karam Gabr, to constantly work on educating young people through the media.”

Sobhy added that training is being provided as part of this, with a working system of reward and punishment to be applied to ensure fanaticism is stamped out.

Sobhy said that the decision to freeze the Zamalek Sporting Club (SC) Board of Directors is final, and does not come under the name of government intervention. The Ministry of Youth and Sport has carried out its role and followed the stipulations of Egypt’s Sport Law regarding financial violations.

The minister added, “We do not accuse anyone until the Public Prosecution decides this through investigations.”

In October, the Settlement and Arbitration Centre of the Egyptian Olympic Committee issued a ruling nullifying the bylaws of Zamalek due to the presence of fraud in the regulations procedures.

However, the decision was appealed by Zamalek and the Ministry of Youth and Sport. The appeal now means freezing the decision which allows the club to continue work in accordance with its bylaws. Hence, the appointment of a normalising committee has come in line with the club’s bylaw.

Despite the repercussions of the novel coronavirus (COVID-19) pandemic, Sobhy has affirmed Egypt’s readiness to host the 2021 World Men’s Handball Championship.

The state has allocated a budget of EGP 3.2bn for the tournament’s success of the tournament. Sobhy affirmed Egypt’s ability to host both continental and international tournaments, which is evidenced by the international praise the country received for its successful hosting of the African Nations Cup , and the organisation of many world championships in various sports.

The Minister has promised Egyptians that a distinguished tournament will be organised, that will both dazzle the world and become a notable event in the history of handball. He emphasised the support of President Abdel Fattah Al-Sisi and the government, headed by Prime Minister and Chairperson of the Supreme Committee for the championship Mostafa Madbouly.

All the equipment and preparations have been undertaken according to the specified time rates, and the covered halls in which the tournament will be held will be a source of pride for all Egyptians.

This is due to the country’s construction capabilities, under President Abdel Fattah Al-Sisi, are proceeding according to an organised strategy, that includes diversity in construction for all sports. There are also specifications at the highest level in accordance with international standards and requirements.

He highlighted that the halls that will host the World Men’s Handball Championship, which will be held in Egypt in January 2021, have been approved by the International Handball Federation.

The Minister pointed out that the championship will be organised with all precautionary measures against the coronavirus in place. 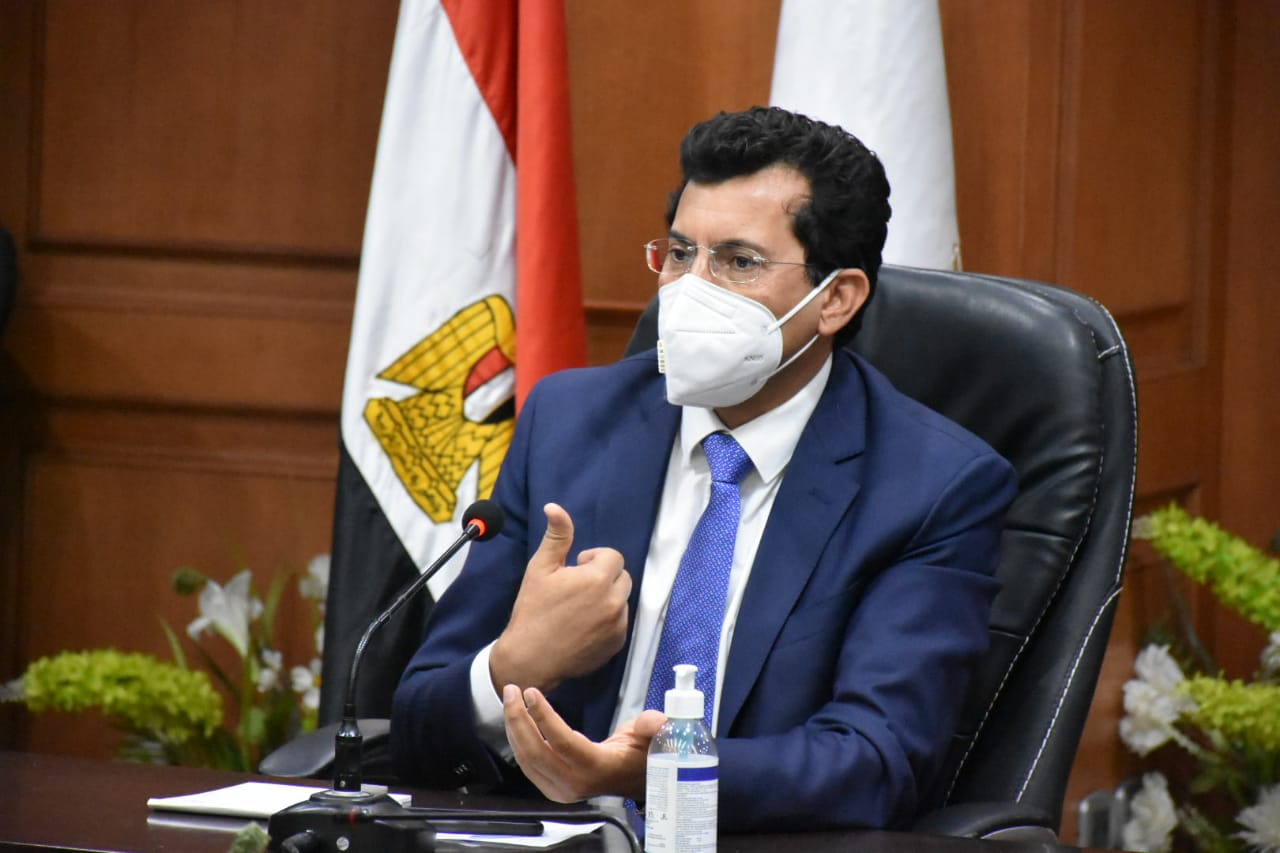 Sobhy said that the role of the Egyptian state in supporting investments in sports is significant, in order to make the sectors one of the pillars of the Egyptian economy. The Ministry of Youth and Sport seeks to build partnerships and integrated cooperation with a number of institutions working in the field. This comes with the aim of developing the needed infrastructure for youth and sport facilities nationwide.

The next stage will witness packages of new projects that include a number of important sectors in the Ministry of Youth and Sport.

The Egyptian state is sinking all its attention into providing investments in all sectors, and supports mega projects in sports. The ministry is working hard to raise the efficiency and develop all facilities, so that it serves as a great opportunity for Egyptian citizens nationwide to develop.

The Minister spoke about the idea of ​​establishing a new club chain, indicating that its goal is to serve the country and reach out to tens of millions of citizens who need a friendly place for themselves and their families.

This comes as part of the state’s direction to support and develop sport, improve life across the country, and encourage investments in the field of sport.

Recently, the Ministry of Youth and Sport has sought to develop the infrastructure for this sector, as well as develop self-resources through investments. This will take place by offering resources and services at youth centres across Egypt, and implement a comprehensive investment plan.

This has had a great impact in establishing a series of social sports clubs, and developing and transforming a large number of sport stadiums, such as City Club, into major investment.

Sobhy added that the Ministry of Youth and Sport has undertaken investments amounting to EGP 6bn during the past two years, which have been directed into many aspects of its work. This includes investment in infrastructure, in addition to the various programmes provided by the Ministry for Egyptian youth over the past period.

He added that there are many infrastructure projects that have made Egypt a rising start, worldwide, for hosting different major continental and international tournaments. It has also ensured that Egypt now receives much praise for being able to host any tournament.

This has been evidenced by the country’s distinctive organisation of the African Nations Championships for adults and under 23 years, for which preparations were made in a short period. Egypt was able to conduct these tournaments to the highest standards, despite winning their organisation on short notice after the championship was withdrawn from Cameroon.

Egypt’s success in organising many international championships in all sports has come thanks to the development of the country’s sporting facility infrastructure. Sobhy thanked President Al-Sisi for the continuous support for all youth and sport activities, and the guidance on exploiting the energies of young people by providing all the capabilities in front of them in all fields.

The Minister added that the goal is currently to spread sport throughout the country by developing youth centres, in addition to ensuring investments are made in sports. This will take place by establishing club branches nationwide that are suitable for all age groups and social segments, and which provide distinguished services to create many champions in different sports.

Sobhy went on to talk about the NAC’s Sport City, which is nearing completion. It includes a large stadium, in addition to the Olympic Village project, and many other projects in the new cities. It is expected that these will contribute to hosting major continental and international tournaments.

Sobhy said that his ministry has 200 training programmes in which over 20 million young Egyptians have participated. These include programmes for: innovation; handicrafts; entrepreneurship; Egyptian identity; education; and Nasser Academy programmes. He added that Egypt’s border governorates receive special attention from the ministry, with opportunities to cultivate talent, loyalty and a sense of belonging.

The Minister confirmed that there is an intention to amend some provisions in Egypt’s new sport law. This comes following recent experience which has illustrated that there is work needed on the provisions, with the ministry now awaiting for the new parliament to amend them.

The Minister said that he has confidence in the ability of Egypt’s champions to achieve unprecedented success at the 2021 Tokyo Olympics, based on their brilliance and distinguished results in various international tournaments and their titles.

Sobhy referred to the support of Egypt’s various sport federations, in coordination with the Egyptian Olympic Committee. Players will receive all support needed, with the country’s sporting entities ensuring regular follow up of their preparations for various competitions. This comes in light of the keenness to continue the achievements witnessed by Egyptian sports during the current period.

Sobhy made note of his ministry’s plan to discover new talent, and highlighted that there is an integrated plan to discover such upcoming and new talents all over Egypt. Current figures show that there are not more than 500,000 sportsmen and women registered across all federations, which is a very weak number compared to the population of Egypt.

“We launched a national project for giftedness, junior and Olympic champions a while ago, where we tour all over Egypt, and up-and-coming children are placed in 215 sport incubators,” the minister said.

The players are selected using modern scientific methods, where they also undergo several tests and physical measurements, as well as technical skill measures. They are also put through physiological health measures.

The player is placed in one of 11 games, including wrestling, boxing, and squash. The player then undergoes a six-year training programme, divided into four stages, of which the first stage runs for two years, the second for two years, and the third and fourth stages for one year each.

The Minister of Youth and Sport said that he always strives for the ministry to keep pace with the digital and technological transformation. He notes that media is one of the most important departments that the ministry pays great attention to through the Youth and Sport Portal.

“We always strive to develop the ministry’s electronic portal system, which was officially launched in four languages, namely Arabic, English, French, and Swahili,” Sobhy said, “This has come in preparation for the Handball World Cup, as well as in order to communicate with youth inside and outside Egypt.”

The online portal is an integrated media system comprised of a news website, as well as internet radio, a YouTube channel, and pages for Facebook, Twitter and Instagram. Put together, these serve Egyptian youth at home and abroad, and act as a bridge for communication between the youth of Egypt and the world.