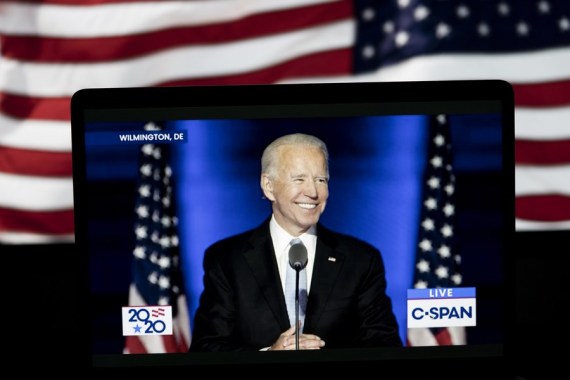 The US Electoral College cast votes on Monday for a new president based on the 2020 election results in the electors’ respective states, making the victory of Democrat Joe Biden official.

The former vice president has surpassed 270 electoral votes needed to clinch the White House after California, which has 55 Electoral College votes, the most of any state, put Biden over the top on Monday evening.

Electors in key battleground states of Pennsylvania, Michigan, Wisconsin, Georgia and Arizona, where Trump had hotly contested but failed, voted with no surprises or defections.

Biden is expected to mark the occasion with an address to the country around 7:30 p.m. ET on Monday.

“Now it is time to turn the page. To unite. To heal,” Biden will say, according to an excerpt of his remarks released by his transition team.

“I will work just as hard for those of you who didn’t vote for me, as I will for those who did,” Biden will say, again vowing to be “a president for all Americans”.

After electors cast their ballots based on the 2020 election results in their respective states on Monday, those results will be certified and sent to Congress, the National Archives and to the courts. Congress will certify the results of the Electoral College vote on Jan. 6 as the next step in the presidential transition process.

Despite the Electoral College vote on Monday, Trump and his allies said they will continue their efforts to overturn the election results, arguing that Jan. 20, when the new president will be sworn in, is the only date set by the U.S. Constitution. In Michigan, the state Capitol was closed during the electoral vote because of threats of violence and protests.

Dozens of lawsuits challenging the election results by Trump’s campaign and his allies have been dismissed at the state and federal levels across the country since the November election.