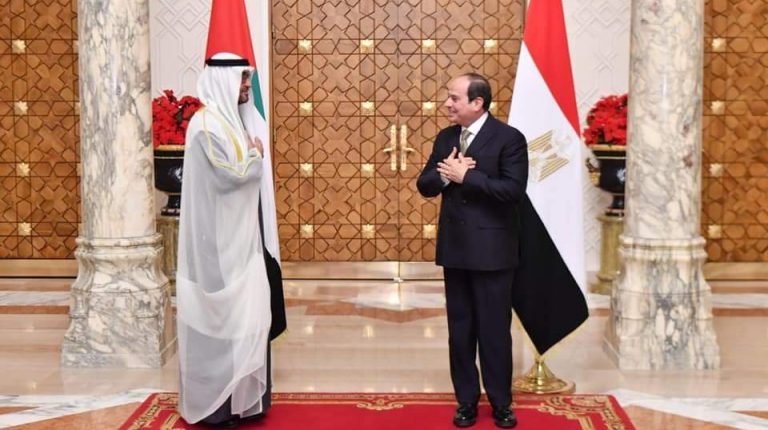 Bin Zayed arrived in Cairo, on Wednesday, to discuss the Egyptian-UAE relations and the developments of major regional issues of common interest.

During a meeting between the two leaders, Al-Sisi asserted Egypt’s position in supporting the Gulf security as an extension of the Egyptian national security and rejecting any practices that seek to destabilise it.

He also hailed the great and qualitative development in the Egyptian-Emirati relations in political, economic, security, and military levels, in addition to the remarkable growth in the trade exchange and investments, according to the Presidency Spokesperson Bassam Rady.

During the meeting, Abu Dhabi Crown Prince expressed his country’s aspiration to extend the coordination with Egypt on regional issues of common concern, asserting the UAE’s commitment to enhance its solid strategic alliance with Egypt.

He asserted the importance of joint cooperation in order to combat foreign interference in the Arab countries’ internal affairs, hailing Egypt’s role as an essential pillar to achieve the security and stability in the region.

The Crown Prince also congratulated Al-Sisi on the remarkable development of the Egyptian economy and the great leaps made in many areas over the past years based on international institutions’ reports specialized in monitoring economic and financial performance worldwide.

Moreover, Rady stated that the meeting also tackled a number of regional issues, including Syria, Yemen, and Libya crises; the Palestinian cause; the Grand Ethiopian Renaissance Dam; and the Red Sea security.

They have also discussed ways to enhance bilateral relations, especially on the economic and investment levels, and establishing new projects in order to maximise the promising investment opportunities available in both countries.