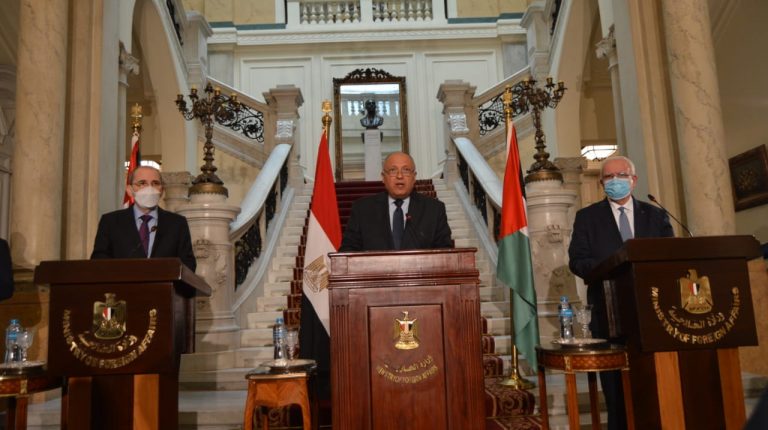 Egypt has called for holding an international conference with Germany, France, and Jordan, in the so-called “Munich format” to stimulate the Palestinian-Israeli peace process. It came during a Saturday joint press conference by Foreign Ministers of Egypt, Jordan, and Palestine in Cairo.

Sameh Shoukry, Egypt’s Minister of Foreign Affairs, stated that all political and diplomatic moves that Egypt took with neighbouring countries come within the framework of the two-state solution. He added that this Cairo meeting is a continuation of diplomatic efforts to find a just solution to the Palestinian cause.

He added that during the discussion with his Jordanian and Palestinian counterparts, he found a great consensus in visions, which can be turned into practical steps by coordinating moves in various international and regional frameworks.

For his part, Jordanian Deputy Prime Minister and Minister of Foreign Affairs, Ayman Safady, said that such meetings seek a comprehensive and just peace that achieves the goals of the Palestinian people, calling for a unified stance to address the stagnation of negotiations and illegal Israeli actions.

He added, “We are dealing with critical circumstances and difficult challenges, and we must work together to affirm that peace is a strategic choice, and the two-state solution meets all the legitimate rights of the Palestinian people. This is the goal that we seek through institutional coordination in accordance with the leaders’ directives and efforts that complement the efforts already made.”

Safady explained that the resumption of negotiations is a necessity, and that the Middle East Quartet would be the best format option to discuss the way forward. He continued, “We extend our thanks to the Egyptian state for hosting and supporting the initiative, and the efforts Egypt makes to serve the Palestinian cause.”

Palestine Foreign Minister Riyad Al-Malky stressed the Palestinian Authority’s readiness to cooperate with the newly elected US administration. He also asserted that the behaviour of the Israeli occupation in the Palestinian territories cannot be overlooked, noting that the Israeli measures related to annexation, settlement, isolation of Jerusalem, and annexation of the Jordan Valley impede the return to negotiations.

Al-Malky emphasised that the Egyptian-Jordanian-Palestinian coordination is very important and establishes an Arab and international stance.

He noted that Palestine agreed to re-coordinate with Israel only after the Israeli side conveyed a message confirming its commitment to agreements.

He said, “We stress our commitment to the two-state solution through direct bilateral negotiations under the auspices of the Quartet.”

Before the press conference, the three Arab Ministers held a consultative meeting that aimed at coordinating positions and exchanging views on regional developments and issues, foremost of which are those related to the Palestinian issue.

The ministers affirmed the depth of relations between the three countries and their keenness on carrying out developments in various aspects, as well as continuing coordinating stances towards regional issues.