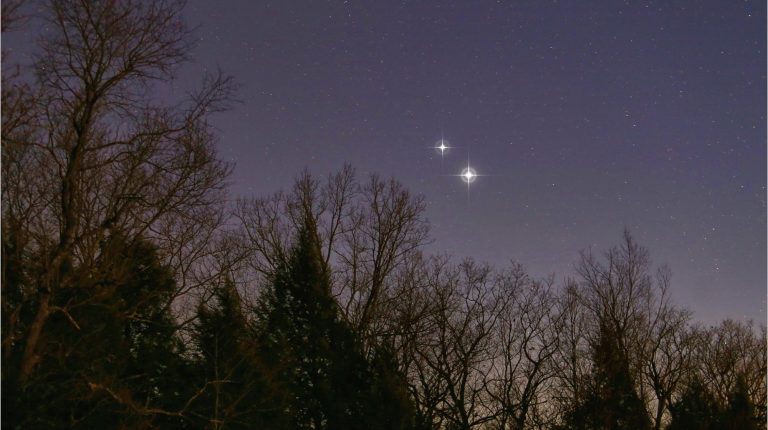 President of the Heliopolis Association said that Cairo’s child museum will prepare astronomical telescopes to observe a rare astronomical event of great conjunction between Jupiter and Saturn.

On 21 December, Jupiter and Saturn will meet in a great conjunction, the closest they could be seen in the sky together for nearly 800 years.

In 2000, the two plants were seen in the last great conjunction, the apparent distance between Jupiter and Saturn in the sky was 68.9 arc minutes, or more than twice the diameter of the full moon. However during 2020’s great conjunction, which coincides with the December solstice, the shortest day of the year in the northern hemisphere and the longest in the southern, the gas giants will appear separated by just 6.1 arc minutes. That is roughly the thickness of a dime held at arm’s length.

An astronomical conjunction occurs when any two heavenly bodies appear to pass or meet each other as seen from Earth. To make one “great,” though, requires an encounter between our solar system’s two largest planets. The orbits of Jupiter and Saturn align to allow the giant worlds to seemingly convene roughly every 20 years.

Helmy invited Egyptians to attend the event of the great conjunction on Monday, which will occur from 5 pm to 10 pm, as the museum will provide telescopes for its visitors at the headquarters in Heliopolis.

Using telescopes, people will be able to see both the rings of Saturn and the Galilean moons of Jupiter close together at the same moment.

People can see the upcoming great conjunction in detail with binoculars and telescopes, but the best part is that this conjunction can be seen with the naked eye.

In order to do so, scientists recommended people to find a spot where they can watch the sunset with a clear horizon, free of trees or buildings. In the hour or so after nightfall, first Jupiter will appear in the western sky, and then Saturn, both shining dots distinguishable from the stars by the fact they do not twinkle. They will likely be visible even with light pollution as Jupiter is pretty bright.

After this great conjunction ends, stargazers will not wait centuries for the next one. Another rendezvous where the giant planets are separated by just six arc minutes will arrive on 15 March 2080, scientists expected.