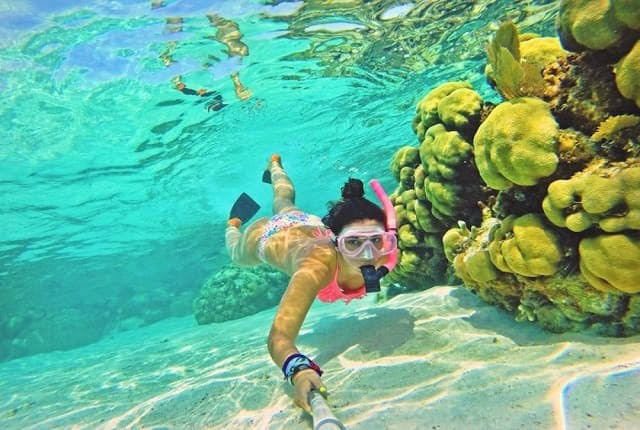 The Egyptian charming city, Dahab, possesses all aspects of beauty and luxury. The resort city has subtropical desert climate, with warmer than average winter.

Dahab is located on the southeast coast of Egypt’s Sinai Peninsula, approximately an hour drive from Sharm El-Sheikh.

The city enjoys great historical importance as it was previously an ancient sea port with amazing natural resources, which made it one of the most important tourist cities in Egypt.

Dahab’s beaches have the most mesmerising nature, with clear water and golden sand.

The former Bedouin fishing village is now one of the Red Sea’s top diving resorts, and a popular tourist destination, attracting thrill-seekers, nature lovers. The city combines the developed town and yet retains a casual vibe, and provides a stress-free seaside atmosphere where visitors can just sit back and enjoy the many shades of blue of its waters.

In this Article, Daily News Egypt will list Dahab’s most stunning beaches, which made this wonderful city a perfect destination for tourists all year long.

The beach is one of Dahab’s most famous sites, and considered to be the world’s most dangerous diving spot with an arch that is a 26-metre tunnel leading divers from the blue hole to the open sea.

There are claims that the hole took the lives of 130 to 200 divers in recent years proving to be a deadly challenge. Being one of the world’s deadliest diving spots, it has boosted the impressive sinkhole’s appeal to brave divers. However, it’s entirely possible to scuba dive safely in the Blue Hole.

The blue hole is believed to be formed by an amazing natural phenomenon when a comet fell from the sky to create a deep hole, shaping that unique beach.

The site also offers many activities, so the visitors can go for a diving trip to explore the sea, or hold barbecue parties in safari and enjoy the authentic Bedouin atmosphere.

There are also limitless options in shallower waters for snorkelers who may want to avoid crowded diving spots.

Travellers can also hike or trek by camel to Ras Abu Galum National Protectorate, which covers 400 sqkm of coastline, and offers a better glance of pristine coral and marine life.

It’s one of the most famous beaches in Dahab. It is considered a natural reserve on land and sea, because of its amazing colourful mountains that surround the beach. As for the beauty of the waters of the canyon, there is a cave inside the sea 52 meters deep, which includes flocks of amazingly colored fish.

This beach is considered the perfect choice for adventure lovers to embark on a fun and exciting experience with rare aquatic life and coral reefs.

The Lagoon is known as Hidden Paradise, the beach has been kept as a Bedouin secret for years and only recently becoming popular with the tourists, this crystal clear lagoon is one of Dahab’s best secrets.

The beach is characterised by its wonderful sandy beach which extends into the depth of the sea, so its visitors can just walk along the beach witnessing a view that is incomparable to other places and a charm that cannot be described by words.

With its flat turquoise waters and constant wind, the Blue Lagoon is a tranquil hideaway with just enough speed for windsurfers and enough wind for kite surfers.

It’s one of Dahab’s most stunning and beautiful beaches, as it offers an exciting view with its exquisite nature. The place has large groups of rare colourful fish that harmonise with each other in an amazing way.

The beach also includes many water sports, which sharpen the spirit of adventure, such as flying with parachutes, water skiing, surfing, and swimming with wonderful fish.

The beach is the most popular among the distinctive beaches of Dahab, as it buzzes with movement and joy all the time, for the fans of tranquillity, this lively beach is not recommended.

This beach has the most beautiful views, and its visitors can enjoy the golden sand either by walking along the beach or having a distinctive sunbath, or go for swimming in its warm clear water.

One of the world’s most famous snorkelling destinations, the Three Pools has three natural pools with sandy bottoms between three or four meter aligned next to each other.

The site is considered as one of the most beautiful diving spots in Dahab. The three pools are suited perfectly for snorkelling. The spot is also predestined for underwater photography. There are waver, organ and brain corals as well as many lion and parrot fish.