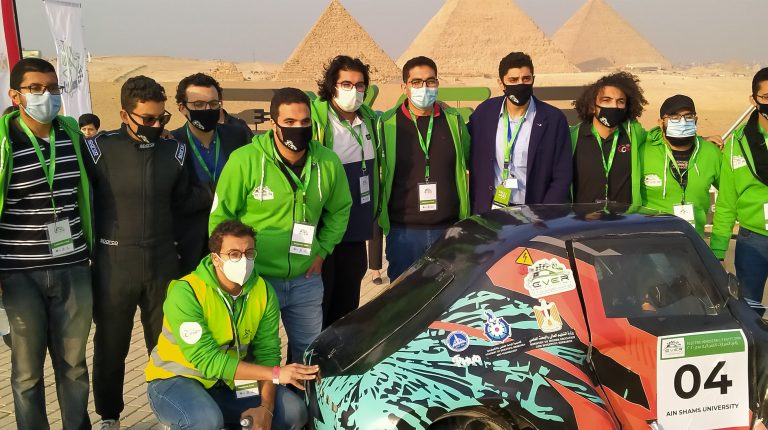 The third season of Cairo Rally for Electric Vehicles has witnessed an increase in the local component of Egyptian cars to 65%, with 35% of the participating vehicles’ components were manufactured by the engineering students who took part in the competition.

Minister of Higher Education and Scientific Research, Khaled Abdel Ghaffar, inaugurated the rally which was held under the auspices of the Prime Minister in front of the Giza Pyramids.

The Minister wore a “rally suit” during the opening of the race. He also took a tour in the race track using one of the electric vehicles.
Abdel Ghaffar said that the electric car rally was an important event that was held despite the compulsive circumstances across in the world that resulted in the postponement of most competitions due to the spread of the coronavirus.

Mahmoud Sakr, President of the Academy of Scientific Research and Technology (ASRT) which sponsored the event, said that the rally was part of the 2030 scientific research strategy to create a suitable environment for innovation, and also came in line with the government’s plan for transfer and localisation of technology and industry.

Sakr indicated that EGP 33m has been allocated to support the rally and the students participating in the race. At the beginning of the event, he thanked the Minister of Higher Education for his support to the rally.

Sakr stressed that the rally is dedicated for locally made electric cars with the aim to support the automotive industry in Egypt.
A total of 30 universities have participated this year. They were filtered to 19 teams, and they witnessed about 300 training hours over a period of 9 months.

Cairo Rally for Electric Vehicles is the first technological competition of its kind in Egypt and the region. It aims to transfer and localise EV technology and deepen local manufacturing.

The Ministry of Higher Education and Scientific Research adopts a programme that includes forming a national alliance for local feeding industries in the auto sector, increasing the percentage of the local component.