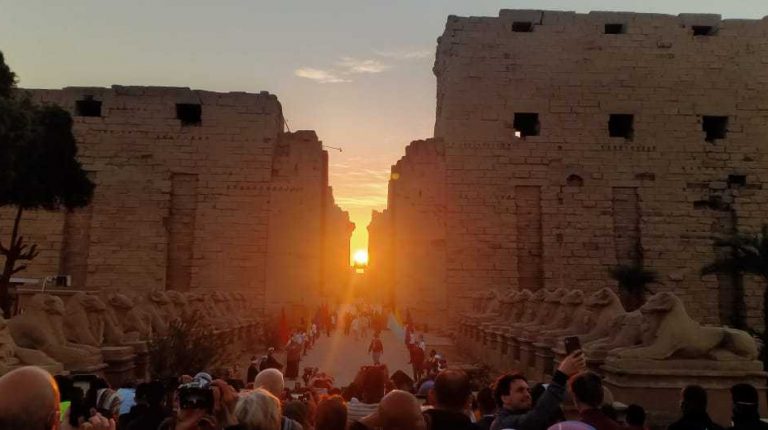 Karnak Temple witnessed on Monday a solar alignment phenomenon at its main axis. The phenomenon occurs every year on 21 December, which coincides with the beginning of the winter season.

Director General of Karnak Antiquities and Al-Kebash Road, Mostafa al-Sagheer, explained that this phenomenon reveals the brilliance of the ancient Egyptian civilization as they linked astronomy with architecture in a unique incident that remained for 2,000 years.

The sun rises on the compartment of the sacred boat of Amun Ra which was built by King Philip Arhidaeus, brother of Alexander the Great, which is perpendicular to the main axis of Karnak extending from east to west. The sun rays penetrate the entrances of the edifices from the sixth to the first, as well as the great hall of the masters so that the visitor can see it at the port of Karnak in front of the main facade of the temple.

Al-Sagheer revealed that this year`s event witnessed a large turnout of Egyptian and foreign visitors who were keen to attend to watch the phenomenon, mentioning that strict precautionary measures were taken, including wearing masks and using sterile disinfectants.

New Roman-era discoveries made in Luxor