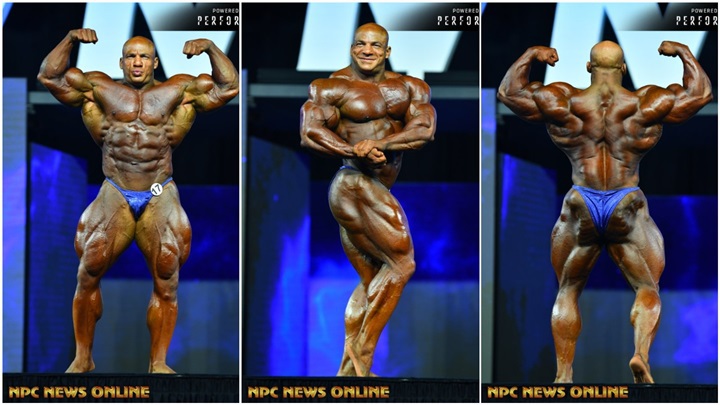 An Egyptian sportsperson has made a global achievement to ensure that the country’s name is carved in gold letters abroad, and raised its position and spread its fame. This achievement came at the hands of Mamdouh Mohamed Hassan Elssbiay, known internationally as “Big Ramy”.

The Egyptian bodybuilder has been crowned Mr. Olympia champion, the largest and most famous championship in the bodybuilding sport worldwide. In winning the title, he has become the first Egyptian to achieve the title, and only the second Arab, following Lebanon’s Samir Bannout in 1983.

It also means that Big Ramy has placed his name among the giants of the bodybuilding world, including Arnold Schwarzenegger, Lovreno, Sergio Olivia, Ronnie Coleman, and others.

This is a significant win for Egypt, considering bodybuilding is the second most popular sport in the world after football.

Writing after his win on Facebook, Big Ramy said, “This title is not mine, this title is for you, my loved ones. Thank you all from the heart for all this support. Praise be to God always and forever.”

Big Ramy, who participated in the open weight category, outperformed the American duo Phil Heath and Brendan Curry, along with Iranian Hadi Chopin.

This year’s edition of the Mr. Olympia was held in Las Vegas, Nevada, from 17 to 20 December.

How it all started?
Big Ramy was born on 16 September 1984 in Kafr El-Sheikh governorate, to a working class family with links to the fish trade. He joined the family business whilst also maintaining his bodybuilding practice. This carried on until he travelled, with his family to Kuwait, to practice the same business activity there.

Since 2010, and whilst resident in Kuwait, he has regularly participated in bodybuilding activities at one of the largest gyms in the country.

In the following year, he won the New York Professional Championship. Also in 2013, he started competing in the Mr Olympia championship and finished in eighth place.

In 2014, he finished seventh in the same tournament, and fourth in the 2015 competition – reflecting his constant hunger for success. Then in 2017, he won second place before losing his momentum in 2018 to rank sixth. Also in 2017, he took first place in the Arnold Classic Europe championship.

Big Ramy tests positive for COVID-19
The champion’s run to the Mr. Olympia title was not an easy one, having announced in October this year that he had contracted the novel coronavirus (COVID-19).

At the same time as announcing his infection, Big Ramy wrote on Facebook: “The matter is completely out of my control. I stayed five months stuck in Dubai after the cancellation of Arnold Australia and now another big opportunity to qualify for the Olympics is lost, but life continues and the show must continue.”

Achievement dedicated to Egyptian people
Islam Kartam, President of the Egyptian Street Workout and Calisthenics Federation, and Chairperson of the sponsoring company of Big Ramy, told Daily News Egypt that the Egyptian bodybuilder’s achievement in winning the Mr. Olympia 2020 title is historic. This is particularly as Big Ramy is the first Egyptian to be awarded the title of the most famous tournament in the sport.

He added that Big Ramy’s great achievement is dedicated to the Egyptian people, especially youth, as he supports them in their endeavours. He is also fully convinced that the Egyptian youth possesses the genes of champions in various sports.

Kartam added that Big Ramy’s achievement is unbelievable, particularly given the significant challenges of the COVID-19 pandemic. It also reflects the athlete’s having fulfilled his dream of winning the biggest championship in the world of bodybuilding.

Kartam praised the support of Egypt’s Minister of Youth and Sports Ashraf Sobhy, who used to follow Big Ramy by calling him before travelling to participate in the tournament to offer support. The minister was also one of the first to congratulate the player after winning the title.

Kartam stressed that he is working according to a long-term plan that has been developed in order to support sports, explaining that for five years, qualifying and local tournaments in bodybuilding have been organised in all their categories, then the greatest event was last March by hosting the Mr Olympia Festival for the first time in Egypt, which achieved success.

Fahim told Daily News Egypt of his great happiness at the victory, which saw the Egyptian flag raised at the most important tournament in the world.

He said that those who have tried to play down this achievement have failed, with the federation successfully and quickly responding to these attempts. Fahim also stressed that this victory is historic and has added to Egypt’s achievements under President Abdel Fattah Al-Sisi.

Fahim emphasised that the international success that Big Ramy has achieved has provided an example of perseverance, patience, strength, and faith to youth both in Egypt and across the Arab world.

Big Ramy’s win has also meant the athlete has achieved his dream after many years of participating in the Mr Olympia tournament.

“Despite the circumstances that he was exposed to, he has gained the respect and received the world’s salutations after achieving the historic achievement,” Fahim added.

He stressed that the Egyptian Federation does not invest in Big Ramy specifically, but rather on activities and tournaments for amateurs, particularly as the game is very expensive.

Fahim added that the expenses of the Egyptian Federation amount to EGP 500,000, an amount that does not cover the expenses incurred on the game over two months by Big Ramy.

This expenditure includes nutritional supplements, vitamins, food, and training, which is the amount covered by major giant companies. As a result, Big Ramy is spending in three months the entire bodybuilding federation’s budget.