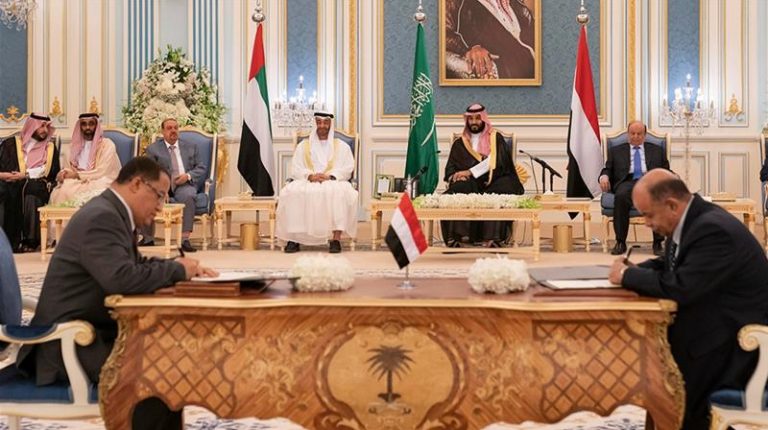 Political experts and analysts consider the formation of a new coalition government in Yemen is a positive step that will pave the way for a comprehensive settlement of internal conflicts.

The announcement has been made according to the Riyadh Agreement, signed in November 2019, and comes after the country’s crisis experienced many chapters.

However, before we survey the opinions of experts and analysts on the current developments, we need to shed light on what has happened in Yemen over the past 10 years.

The country, strategically located on the southern tip of the Arabian Peninsula, controls one of the most important shipping lanes in the world. During the decade-long period, the country has witnessed great turmoil due to the internal repercussions, and the growing external repercussions, of its crisis.

It has also been subject to hostile Iranian-led moves to impose the latter’s hegemony on the long-suffering country, with the support of the Houthi movement, which is in complicity with Tehran, with financial and military support.

The first real chapters of the internal instability came about due to the growing influence of political Islamic movements, including organisations that support Al-Qaeda and ISIS. This has played a major role in destabilising the Yemeni government, especially after the fall of former President Ali Abdullah Saleh and his subsequent departure from the leadership position.

The rebel Houthis announced the fall of Yemen’s capital, Sanaa, on 21 September 2014, making it the first Arab capital run by loyalists. They were funded with money and weapons from the Wilayat Al-Faqih regime in Iran, led by the religious guide Ali Khamenei.

The Houthis then issued what they called a “constitutional declaration”, and dissolved the parliament. This came after the militants tightened their control of Yemen’s Central Bank and the General Authority of Civil Aviation and Meteorology, as well as the headquarters of the country’s Ministry of Defence.

Meanwhile, President Hadi, who had announced his resignation, managed to head towards Aden, Yemen’s second capital in the southern region, on 21 February 2015, announcing himself as the country’s president from his new location.

The United Nations (UN) Security Council issued a statement describing Hadi as the “legitimate president”. This, in turn, led to the beginning of the Saudi Arabia-led confrontation within the coalition “to support legitimacy”, and which was apparently to ensure the security of the region from Iranian-caused chaos led by its armed ally, the Houthis.

However, this does not reflect all the details of the crisis that seemed to be very complicated. President Hadi’s transfer to Aden, then to Riyadh as a transitional residence station, was on the surface to facilitate the tasks of the Yemeni state, and to strengthen field movements and international negotiations.

This occurred at the same time as an internal rift between the Yemeni allies, who are engaged in a fierce confrontation with the Iranian enemy represented by the Houthi group. This came as the rebel group tightened its control over Sanaa, despite the losses it was incurring, as a result of the painful strikes by the Decisive Storm military operation.

The beginning of this split brings us to the Riyadh Agreement and the formation of the new government coalition. At this point, Major General Aidaroos Al-Zubaidi, governor of the interim capital of Aden, called, in 2016, for work to be carried out on establishing a southern political entity that parallels the political forces in northern Yemen.

At the time, Al-Zubaidi said that the emerging entity would represent the aspirations of the southerners in any political entitlements for a political solution in Yemen. It was surprising that the arrangement and preparation of this entity remained hidden from media attention and analysis for months, which was a great shock when it was announced.

It was also followed by a presidential decision removing Al-Zubaidi and some southern leaders from their positions in President Hadi’s government.

This provoked a state of popular discontent, and many southerners considered this as an attempt to jump on their sacrifices, and to exacerbate the dispute. The Riyadh Agreement, signed in 2019, aims to counteract this and reunite the factions in conflict, and unify them against the real enemies who target the Yemeni state and its stability, the Houthi group. The formation of a Yemeni government has enjoyed wide Arab, regional and international blessings.

At this point, Daily News Egypt decided to poll the opinions of experts, to inquire about the results of this agreement, and the future of the Yemeni conflict.

Mohamed Al-Mikhlafi, a senior researcher at the Yemeni Studies and Research Center, said that the new government coalition is a return to the spirit that had prevailed among Yemen’s political forces since the country’s 11 February revolution. At the time, the revolution saw much consensus and partnership away from revenge.

With this government coalition, the spirit has returned once again to the agreement on the mechanism for implementing the transitional process in Yemen, albeit with the defect of not involving women.

Al-Mikhlafi added that, regardless of the lack of involvement of some parties or the weakness of the partnership of other parties, it is the first step towards returning to the political process. It will also see the re-consideration of political pluralism, the abandonment of narrow partisan interests, and move away from sub-national affiliations and exclusionary ideologies.

He indicated that there is also now an army that will deal with the current situation of Yemeni unity between its north and south.
Political researcher Muhammad Mohsen Abu Al-Nour, head of the Arab Forum for Iranian Policy Analysis (AFAIP), said that the formation of the new Yemeni government announced by Hadi is a positive step.

The government includes 24 ministerial portfolios led by Moein Abdel-Malek, and has been divided equally between the north and the south of Yemen. This comes in accordance with the decisions outlined by the Riyadh Agreement, which is a positive step towards unifying the right ranks.

It will also strengthen the efforts of Yemeni patriots to achieve the building of a strong and stable state. This will in turn unite the country’s northern and southern regions, without fragmentation or division, and without the participation of the Houthi group.

Abu Al-Nour added that the nationwide consensus in Yemen between its north and its south, in light of the Houthis’ continuing practices against the country, represents an explicit threat to its stability.

He noted that with the national fabric gathered, there was no longer much time for the allies of the Iranian agenda, which aims to be a thorn in the back of Saudi Arabia. This is particularly given the Iranian-backed Houthis’ attempts to take advantage of Yemen’s long-running internal disputes to increase its gains.

Abu Al-Nour noted that the Yemeni-Saudi steps aim to make the Houthis in this way outside any political equation in the near future. This is due to the Houthis not wishing to negotiate the shape of Yemen’s future, and to be part of the political solution.

The second point is that the government’s formation represents a major threat to the Houthis, taking into account that they have an Iranian political strategy, which is to control all of Yemen rather than fragment it.

Iran wants the Houthis to rule this country completely, unified in its current form, so that a dagger remains in the side of Saudi Arabia.

Therefore, the new Yemeni government is an explicit and strong blow against Tehran. Iran has long been accused of using internal rifts in Yemen to push the Houthi group towards gaining total control over Yemen, considering that it is also facing heavy losses.

Abu Al-Nour concluded that the current developments in accordance with the decisions made under the Riyadh Agreement on the Yemeni arena undermine the plans of Iran’s Supreme Leader Ali Khamenei.

Despite Khamenei enjoying political and religious symbolism in the Wilayat Al-Faqih system the Riyadh Agreement proves daily that Iran’s calculations were not accurate. This comes particularly after it suffered economic and political losses on various levels, at a time when Saudi Arabia is taking steady steps to protect its southern region and Yemen’s security from direct Iranian threats.