Egypt is intensifying efforts to curb the recent surge in the novel coronavirus (COVID-19) spread, which has claimed the lives of 7,352 people since the arrival of the pandemic in February 2020.

As a new strain of the virus, which is believed to be more infectious, continues to spread from the UK, fears have increased over the strain’s potential appearance in Egypt. These fears have gained momentum on the back of the continuing increase in daily confirmed cases in Egypt.

In the past week, the country has started reporting over 1,000 daily cases, after several months of decline. On 24 December, the Ministry of Health and Population registered 1,021 new coronavirus cases, both the first significant rise in the country and the first time, since July, that the number of cases has risen over 1,000.

The number of coronavirus-related fatalities also increased to 51 last Thursday, after months of decline commensurate with the fall in confirmed cases.

Until Saturday, Egypt’s total cases stood at 131,315, of whom 109,462 recovered. Egypt ranked 64th globally for the number of confirmed cases. 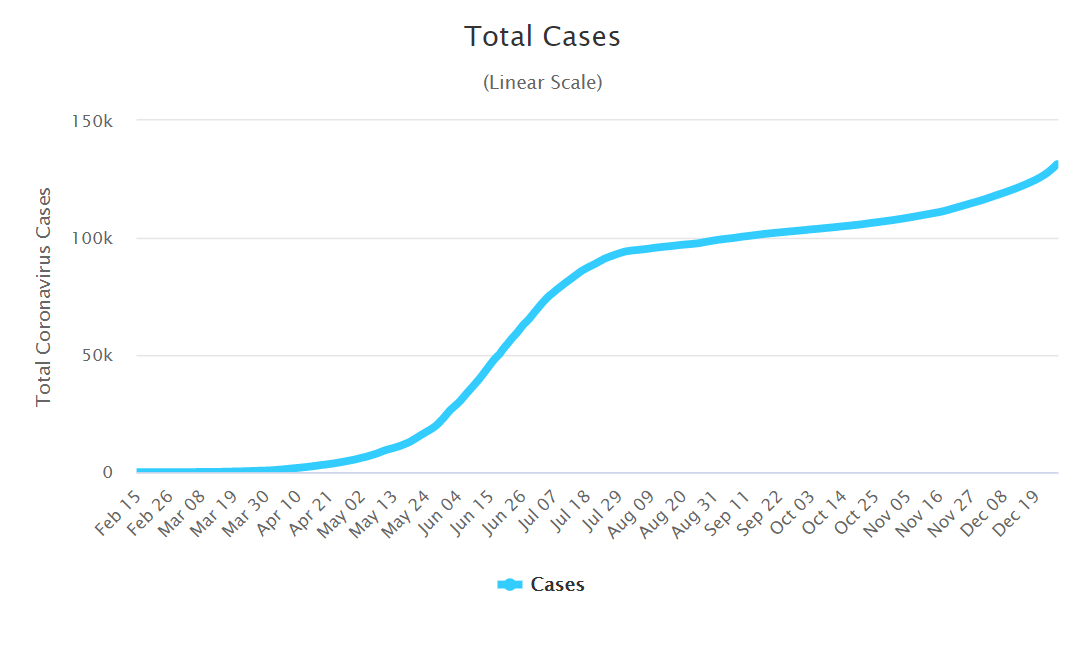 There was a small fluctuation in case numbers during early July, with the first drop below 1,000 COVID-19 cases reported on 6 July. However, it increased again to 1,057 cases on 7 July, and 1,025 cases reported on 8 July. Following this episode, the daily cases across Egypt continued to decline, with relative stable daily counts. This stability continued throughout August, September, and the first half of October, before it started to increase again over the second half of October, and throughout November and December.

The increase in virus related infections and fatalities, and the concerns of a second wave of the coronavirus, has forced the government to reopen most of the hospitals it had allocated for COVID-19 isolation and treatment.

Meanwhile, Egyptians are being urged to adhere to social distancing, wear face masks in public, and to avoid overcrowded places and social gatherings. The reiteration of these guidelines as a matter of public health and safety comes as the government attempts to avoid a second lockdown.

As part of these health and safety measures, the government decided last week to cancel New Year celebrations to limit the spread of COVID-19. Earlier in the year, it had prohibited wedding ceremonies and cultural events in indoor venues for the same purpose.

During a press conference last Wednesday, Minister of Health and Population Hala Zayed announced that a total of 363 hospitals have been allocated to offer medical services during the pandemic. These Include a total of 338 hospitals which have been designated for COVID-19 isolation and the sorting of cases. 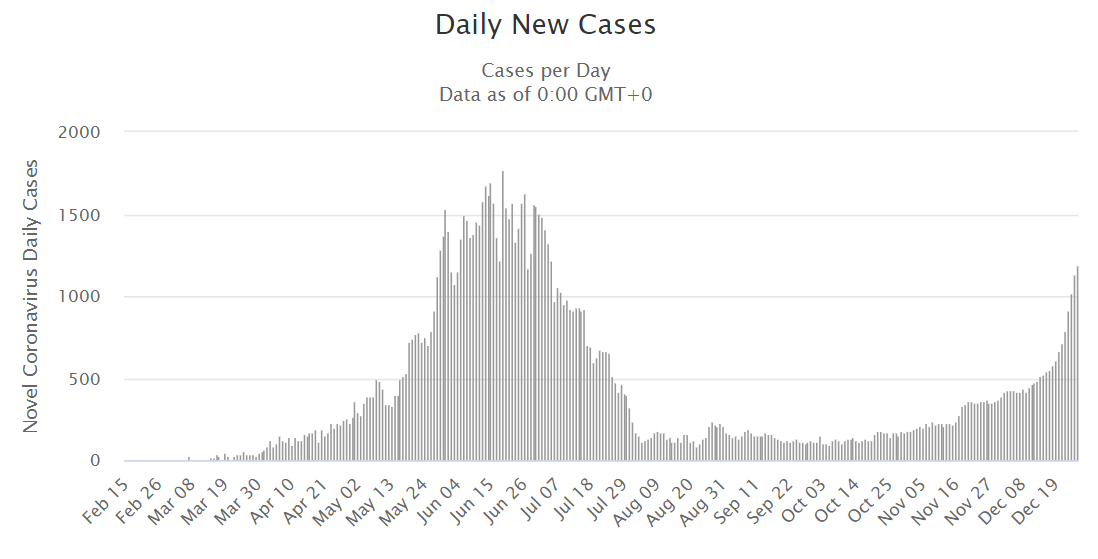 Zayed said that these hospitals have a combined total of 35,000 beds in their internal departments, 4,500 intensive care unit (ICU) beds, and 2,500 ventilators, with a further 200 ventilators to be brought in to cope with caseload.

In a similar context, Minister of Higher Education and Scientific Research Khaled Abdel Ghaffar said, last Friday, that his ministry will reopen 25 university isolation hospitals. This will increase the number of beds available to 2,377 beds in internal departments, 523 ICU beds, and 418 ventilators.

In televised remarks, Abdel Ghaffar said that the occupancy rate of COVID-19 patients at university hospitals stands at 65%, from 50% to 55% in ICUs, with 15% to 18% of intensive care ventilators being used by this segment of patients.

Abdel Ghaffar added that “the COVID-19 cases isolated in homes are more than those at hospitals.”

Has mutant coronvirus arrived in Egypt?

Abdel Ghaffar said, on Saturday, that there is no new mutated form of the novel coronavirus in Egypt, but rather “a genetic variation of the virus causing new symptoms,” adding, “Egypt has recorded five variants of COVID-19 so far.”

However, Dr Mohamed Al-Nadi, a member of the scientific committee to combat coronavirus, said, in televised remarks, that he believes that the new virus strain is likely present in Egypt. Al-Nadi added that although the virus has become more virulent in its spread, it is not the same level of severity.

Mohamed Awad Tag El-Din, Presidential Adviser for Health and Prevention Affairs, said on Saturday that it is possible the new coronavirus strain found its way into Egypt as its borders remain open. He added, however, that internal monitoring of the virus in the country shows that it is still dealing with coronavirus strains similar to the eight that are already known, some of whom are already in existence in Egypt.

The highly infectious new coronavirus strain that was recently discovered in the UK led many countries worldwide to last week shut their borders to the country. EgyptAir, however, said it has not taken any measures to suspend travel between Egypt and the UK, adding that flights continue whilst putting in place the requisite precautionary measures.

The discovery of the new strain has led to further global panic, in a world that is still suffering the consequences of the pandemic’s first wave. The virus has so far infected over 80.6 million people worldwide, while 1,764,039 people have died.

Concerns have increased as the new variant of the coronavirus may be more able to infect children, according to scientists at the New and Emerging Respiratory Virus Threats Advisory Group (NERVTAG).

Wendy Barclay, NERVTAG professor and a specialist in virology at Imperial College London, said that the mutations to the virus appear to enter human cells, which means “that children are, perhaps, equally susceptible to this virus as adults.”

He added, “The infection rates among children in Egypt do not exceed 5%-10% of the total number of COVID-19 infections in Egypt, according to the ministry study.”

Despite calls via social media over the past days to postpone final exams in schools amid the increase in cases, Minister of Education Tarek Shawky said last week that closing schools is a sovereign decision. He added that if the need to close schools arises, the state will take it.

Earlier, the minister had announced that school students have the option to refrain from attending classes for the rest of the first term. However, he said that students will have to take their exams at school.

Earlier in December, Shawky said that there have been between 300 and500 confirmed COVID-19 cases among school students, with80% of them having recovered.

Abdel Ghaffar said, on Friday, that his hypothetical model shows that the actual number of coronavirus cases is much higher than the registered numbers. He added that this model indicates that the peak of the coronavirus’ second wave in Egypt will start in January until the first half of February.

Dr Muhammad Al-Nadi, a member of the scientific committee to combat coronavirus in Egypt, agreed with El Shafei. He said in press remarks that actual numbers of COVID-19 cases in the country are maybe 10 times higher than the official numbers announced.

The recent increase in COVID-19 cases and fatalities has affected all strata of society. On Saturday, Mostaqbal Watan Party member Hassan Eid, who was recently elected to the Suez seat, died of the coronavirus only a day after his wife died of the virus. In November, MP Gamal Hajjaj also died of COVID-19.

Two other MPs, Ghada Kamal Qandil and Diaa Dawood, recently announced they had contracted the coronavirus.

In the meantime, the number of doctors who have died from virus-related complications has also increased to 251, according to the EMS, while around 10,000 doctors have been infected so far, El Shafei added. The medical workers at Egypt’s isolation hospitals will have priority in receiving the COVID-19 vaccine, in addition to people with chronic diseases and the elderly. The vaccine will be free of charge in Egypt.

So far, Egypt has received two shipments of the COVID-19 vaccine developed by the China National Pharmaceutical Group (Sinopharm), with support from the UAE company G42 Healthcare.