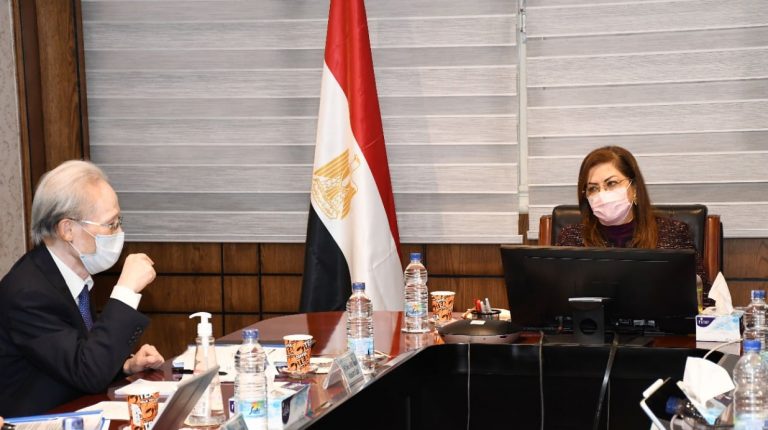 Egypt’s Minister of Planning and Economic Development Hala El-Said has met with Japan’s Ambassador to Cairo, Masaki Noke, to discuss aspects of cooperation between the two countries.

The meeting was attended by Ayman Soliman, CEO of The Sovereign Fund of Egypt (TSFE), as well as a delegation accompanying Ambassador Noke.

During the meeting, El-Said reviewed the latest developments and reforms undertaken by the Egyptian government in the field of economic development, and the dimensions of the country’s development experience.

The minister highlighted the environmental changes currently ongoing around the world,Egypt’s interest in sustainable development, and the trend towards a green economy following the Vision 2030.

In light of this, the Egyptian government has adopted a national strategy for the transition to a green economy. As part of this,work is underway to ensure that 30% of investment projects in the state’s plans achieve environmental sustainability and green economy concepts. It is projected that this percentage will rise to 100% in the next three years.

El-Said saidimportance is being placed onenhancing the benefits to professionals in Egyptofspecialised training courses offered by the Japanese International Cooperation Agency (JICA), especially in the areas of planning and economic development.

As part of this, coordination can take place with the National Planning Institute (NPI) and the National Institute for Governance and Sustainable Development (NIGSD). This comes in light of the Egyptian government’s interest in raising the efficiency of the human element.

The minister praised the support provided to Egypt by Japan,in the latter’sefforts to join the Organization for Economic Cooperation and Development’s (OECD) country programme. This includes the programme’s multiple axes, the most important of which is science, technology, and innovation, in which the Japanese side can contribute with its extensive experience in this the field.

For his part, Ambassador Noke expressed his appreciation forthe meeting with El-Said, and congratulated her on obtaining the Government Excellence Award as the best Arab minister. The ambassador also affirmedhis country’s keenness to enhance cooperation with Egypt in all fields.

Topics: Japan JICA The Ministry of Planning and Economic Development