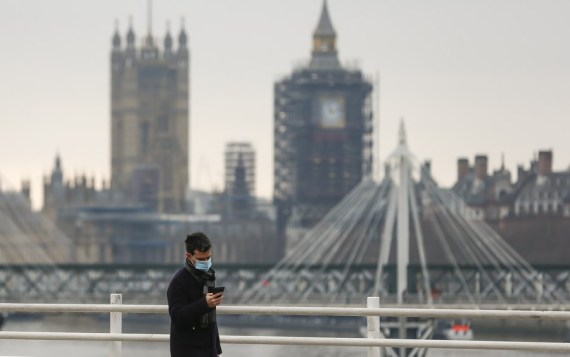 Coronavirus in Britain reached new highs as more than 50,000 coronavirus cases overnight for the first time since the outbreak of the COVID-19 pandemic in the world, according to official figures released Tuesday.

Another 414 have died within 28 days of a positive test, bringing the total number of coronavirus-related deaths in Britain to 71,567, the data showed.

The latest figures were revealed as a scientist advising the British government warned Tuesday that “decisive” national action is needed to prevent a “catastrophe” in the new year.

Britain is “entering a very dangerous new phase of the pandemic” due to the spread of a new coronavirus variant, said Prof Andrew Hayward, a member of the government’s New and Emerging Respiratory Virus Threats Advisory Group (Nervtag).

“The previous levels of restrictions that worked before won’t work now, and so Tier Four restrictions are likely to be necessary, or even higher than that”.

Also on Tuesday, the chief of the country’s National Health Service (NHS) warned that Britain is “back in the eye of the storm” as the number of patients being treated for COVID-19 in England’s hospitals has overtaken the peak in April.

“Now again we are back in the eye of the storm with a second wave of coronavirus sweeping Europe and, indeed, this country,” Simon Stevens, the chief executive of the NHS, said during a visit to an NHS vaccination center.

The British government’s Scientific Advisory Group for Emergencies (SAGE) has urged all regions of England to be placed in highest Tier Four restrictions, which require residents in the areas to stay at home, with limited exemptions. People are also urged to work from home when they can, and should not enter or leave those areas.

The number of coronavirus patients being treated in London hospitals has increased by almost 1,000 since Christmas Eve, stark new figures reveal.

Unlike the UK as a whole London is yet to exceed its first wave peak of hospital patients, which hit 5,201 on April 9.

London and many other parts of England have already been under Tier Four restrictions. For those in Tiers One, Two and Three, up to three households were allowed to meet only on Christmas Day, while in Tier Four, people should not mix with anyone outside their own household, apart from support bubbles.

To bring life back to normal, countries such as Britain, China, Germany, Russia and the United States are racing against time to develop coronavirus vaccines.

First coronavirus in Britain infection case was on 31 January 2020.